The ex-nymph of pop now lives in the countryside. She released a new CD and will play in a musical.

Wrapped in a thick coat, Kim Wilde has patience in her cabin before performing one of the songs from her new album, Now and Forever. The tubulent pop star of the Eighties does not deprive herself from wearing a bright turquoise blue nail polish. As of the first questions, Kim finds her smile.

In your last disc you assert the heritage of the music soul. Have you been a fan for a long time of this kind of music?
As a teenager, I listened to Stevie Wonder, Gladys Knight, Diana Ross and the artists from Tamla Motown (the firm which published a number of large American singers black in the Sixties and Seventies, like Marvin Gaye, note)... But I liked also the music more "dance" like the discs of Donna Summer.

This CD consists of love songs. Where does the melancholy which emerges from some of them come from?
It is true that my other discs approached more various themes, but this one corresponds with this period of my life. I have devoted four months writing with the assistance of my brother, Ricki, then I stopped, because I had the feeling to have said all that I had to say. I returned later to write the other lyrics. This recording was for me a kind of personal journal, a therapy. Even if certain titles have a sad side, there's always an optimistic note there.

In spring, you will play in the musical Tommy, in London...
It is a totally new experience for me. I did an audition for the first time of my life. It was a nightmare, I almost died of nerves because I had to sing in front of Pete Townsend, of Who, one of the creators of Tommy. But it all passed very well, and in March, I will be Mrs. Parker [sic], the mother of Tommy, on the stage and our version of the rock opera will be the definitive one. (Laughs)

Are you at a turning point in your career?
I have the feeling that things will move for me not only at the professional level but also in my life generally. Moreover I am a Scorpio, and the stars announce many changes for my sign! At 35 years, I evolved/moved in my head, I matured. I smell myself better than at 20 years. I am more serene, happier. I left London and I live in a very old barn which I am restoring. I drew myself the plans of the garden. Over there, I am calm, closer to nature. I deal with my plants, and my trees... and I can put the music aside! 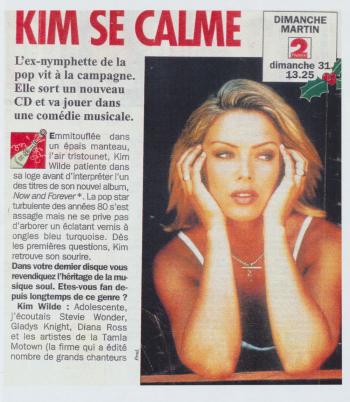