Many women dread the thought of reaching their thirties. But singer Kim Wilde is now halfway through them - and proud of it. After years of battllng wlth her welght and depression, the sexy blonde reckons she has never looked - or feit - better. At 35, with a new acting career in front of her and a string of pop hits behind her, Kim is a woman who's got it all - and loves every minute.
She says: "I love heing 35. Physicaliy and emolionally I'm at my peak. In fact I'm peaking. I like getting older, it's cool. I'm at ease with myself and calm about life.
"For many years, I didn't wake up feeling ca1m. I went through a really bad perlod where I felt terrible about waking up! I've been to some places in my head that weren't very nice hut these days I have peace of mind.
"I'm more phi1osophical, I used to worry and cry about my life but not anymore."
Kim shot to fame in the ear1y Eighties with hits like Kids In America, You Keep Me Hanging On and Love Is Holy. She has just landed her first West End role starring as Mrs Walker in Pete Townshend's £2 million musical Tommy and, in October, released her first slngle for two years, Breakln' Away.
Amazingly, in the early days of her 15-year career she 1acked confidence in her looks - and would never have worn the tlght leather jeans and tops she favours today.
Now fit and toned, she makes the most of her curves and has even been compared to pouting blondes Marilyn Monroe and Brigitte Bardot.
She says "My welght has always fluctuated and it got me down. I used to feel I didn't look my best. Now I go to the gym and love to go rollerskating. I've also changed my diet and I eat very healthily now.
"But I still love to go out and have a big booze-up. I can drink with the best of them. Live is to be lived after all."
Kim's new relaxed outlook extends to her love life. She split from Radio 1 DJ Chris Evans at Christmas 1993 and, now living alone, admits she wants marriage and kids - but only with Mr Right.
Kim says: "It probably would complete my life but if it doesn't happen, c'est la vie. I've had brilliant relationships. There's many reasons why I haven't met Mr. Right. But I am a great believer in fate."

Kim nearly quit Britain to set up home in Australia after touring there last year and seeing her greatest hits album go platinum. Telly bosses offered her lucrative TV deals - but the pull of her home in Hertfordshire, family and friends was too strong.
She says: "I love living in Britain and loev the British because we're funny, solid, honest - and the best whingers in the world!"
Kim has paid a price for her success - being hounded by stalkers. She says: "I've had people walking outside my house at night, some with weapons, stalking me and writing strange letters. That's still going on and is weird."
But Kim reckons she can cope with fame and without it. She is determined to quit the pop world while she's on top without any regrets.
She says: "I've got a couple more albums in me but I won't be a pop star for the rest of my life. I'll leave it before it leaves me. I've been gearing myself up psychologically to accept not being famous. When all this goes it won't bother me." 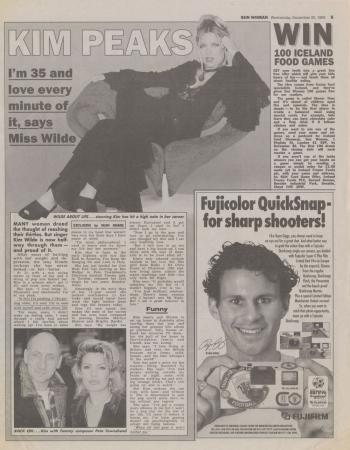