It is very strange, but if you would ask someone for the most successful British artist, he or she won't be mentioning Kim Wilde. Kim, wasn't she the teen idol of the eighties? Sure, but Kim is more. Kim isn't just from the old days. Kim is still active, and judging from her new album 'Now & forever', she wants to stay around for a while. For how long? Forever, she thinks. An interview.

When Kim Wilde (born on 18 November 1961 as Kimberley Smith (1960, Kim Smith - MR)) surprised the world in the spring of 1981 with the new wave popsong 'Kids in America' she looked like the girl next door that everyone would recognise from their own neighbourhood. She was beautiful & fresh, but certainly not an unapproachable beauty. She could sing but not extraordinarily well. Dancing was for Kim no more than moving a bit to the rhythm of the beat. In short, Kim was the ideal 'girl next door' with a sympathetic one day fly image. But the one day turned into two ('Chequered love'), three ('Cambodia'), four ('View from a bridge'), it become a week, a month ('Love blonde'), a year ('You keep me hangin' on'). Meanwhile, it's now fifteen years. Kim is still around. Her image has remained sympathetic and proud of what she's achieved she prepares to sit comfortably for the interview with Free. Cross-legged on the floor, a cup of tea within reach. She has got the new CD in her hands - straight from the factory. "That is a new sensation every time", she says. "This is what I have done all those months. A disc in a plastic box... But at the same time it's the most intimate document I've trusted to eternity. From beginning to end I have kept control over 'Now & Forever'. It's a risk, but I could afford it." It is corny, but when we shake hands with Kim it strikes us how frail and small she is. We were thinking of a 70 kilo, 1m80 tall blonde. She is 1m60 and 50, 52 kilos at most. She looks fantastic and we say so. "Thanks, I feel good. I finally feel comfortable in my skin. It had to take 35 years before I knew what was right for me. As long as I live I have had quarrels with my body. The one time I was too fat, the other I was too weak, I was losing weight but at the wrong places, I was gaining weight at the wrong places. It is a cliche, but in rock 'n' roll you eat the wrong things and drink too much. God knows I've had my share in the past years. Now there is control. Just by learning it along the way. I don't have to live like a nun either."

Has it got anything to do with personal circumstances? Do you have a relationship, do you want to become a mother?
"No, there are no plans for kids yet. I have no relationship at the moment. It's easier to get a loving and dependable man when you're not in the spotlights. Just ask my colleagues, there are relatively more 'single stars' between them."

Who is your 'ideal man'?
"Hugh Grant was my hero for a couple of years, he had everything I was searching for in a man. Humour, style, a soft character... he's a darling. Was a darling I should say, because after the incident with that hooker on Sunset Boulevard I have crossed him off my list. Now it's Damon Albarn of Blur. I don't have a very exclusive taste, because everyone seems to love him. His music is great and the lyrics he writes are sheer genius."

Do you regret being single? Is it the price you pay for fame and fortune?
"Sure, I would love to have children. I have the age, plenty of money, a beautiful house, everything is okay. But I'm not sad. I enjoy the status I have now. What to think of the freedom I have. When my career began I was of course very dependant on my dad and my brother. They wrote and thought about things for me. My image, the songs, everything in fact. In that sheltered situation I could stay on top of things."

Was it never a hindrance, all the things Marty and Ricky did for you?
"No, I really couldn't say that. My bed was always made for me, so the only thing I could have developed was laziness. Others have more of a tendency towards that than I have. I think it's a lot like other family businesses. Of course you get irritated every once in a while, you get tired of one another, but when it comes down to it, you can depend on each other blindly. You won't hear the standard story of the naive star who has been cheated out of millions by the business. No, my dad knew all the pitfalls." (Marty Wilde scored five top 10 hits in the period 1958-1962, ed.)

How is the relationship with the Wilde family at the moment?
"It's good. Ricky has only worked on five of the songs on my new album, but those are songs I wanted to make with him because there were some good ideas for them. In the old days there was a stack of songs and that was it. Now I say what to do and what I feel. I sing melody lines myself on a tape recorder and sometimes eighty percent of the work is ready then. But when I come to Ricky for the remaining twenty percent he won't be feeling neglected. Contrary to that, he's proud that his older sister has learned to compose.

You have been in the business for fifteen years now. How do you see yourself in the history books later?
"Oh, I don't think much of that. I can be happy if I come into it on a footnote. I am no Madonna or Barbra Streisand. What I like about my own voice is the love for soul I hear in it. My voice is recognisable but not very grand. My career is good, but let's not start about Madonna. She has achieved so much, she must have had a very unhappy childhood. Her drive, the ambition, I admire her a lot. She comes from a different league, she's from a higher order. I can compare myself with Kylie Minogue, but she is more beautiful than I am (A sign, followed by a generous laugh). But I'm not complaing. I would do everything just the same if I had to." 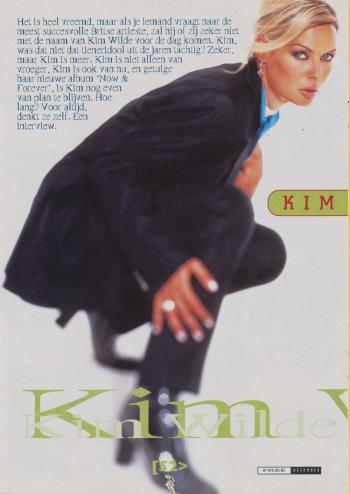 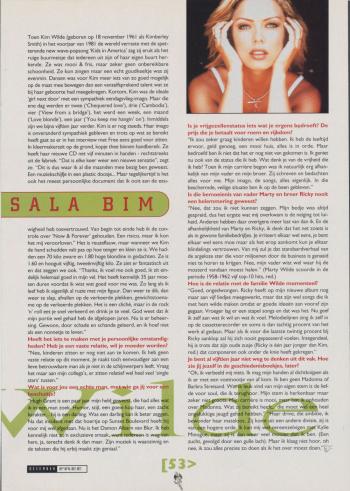