After a successful Greatest Hits tour and a resting period of almost two years, Kim Wilde is back with her new album Now & Forever. She wants to leave her past behind with it. I spoke with Kim Wilde in Amsterdam about music, relationships and future plans.

Why did you choose the title 'Now & Forever' for the album?
'Now & Forever', a song influenced by soul and rhythm & blues, is one of the songs on the album which I'm most proud of. It is a good example of the new direction I have taken. On top of that I like the expression of eternity: things that will live on forever and that express strength and energy, like music and love, give me a great feeling.

You chose for 'Breakin' Away' as the first single. Why?
I think it contains a really good message: it's about someone who disconnects from the past and their own limits. It is about me in a way, because with this album in a different style I disconnect from the past as well. On top of that, it's a really great song, full of energy.

Was there any particular reason to go in this different direction?
During my Greatest Hits tour I became aware that I just wanted to do something new. I had a great time, which I really enjoyed. Enthusiastic fans and gold records for the Greatest Hits album were all expressions of appreciation. But when you're doing a project like that you're very involved in your past. I wanted to do something completely different.

In what way does this album differ from all its predecessors?
For the first time I worked with other writers and producers. There were different singers for the backing vocals, which I used to do myself. The most important difference is that I have listened more to the soul girl within me. I do love pop music, but somehow I've always had a love affair with soul. I followed my intuition and because I am in a position where I could do this, I have made the music I've always wanted to make.

I think the album sounds very commercial, though. It seems like a calculated effort to make a comeback.
I think this album is a mixture of personal and commercial interests. I would love to have a hit again. That is important. A hit does open doors, there are more people listening to your music when you have a hit. But I will always love what I do whether I have a hit or not. It doesn't make any difference to me whether I will sell ten or ten million albums. Although I would prefer the latter, of course.

Do you sacrifice your private life for your career?
No. I don't have a steady relationship but I do still have strong emotional ties with friends from my school days. The same goes for my family. If I had sacrificed my private life, then those good relationships wouldn't be there. In the first ten years of my career my private life has suffered a little from my career, because I was totally focused on it. During the weeks I was on tour with Michael Jackson I was very unhappy. My career was at an all time high, but personally it was a mess. I became a lot happier when I hit thirty. I started thinking more about my life and I got more emotional satisfaction. My life and career seem to go together a lot better now, despite the fact that I am not a superstar anymore.
Success is not the most important thing in life. Like I said, love and friendship, things that are 'eternal', are.

What does the future look like for you?
The next few weeks I will do promotion for the ballad This I swear, the second single off the album, which will be released in Europe around Christmas. In 1996 I'd like to do a lot of small concerts in clubs. I don't know what follows. I will see. I hope to have a husband and children at some point, but I would have to find the right man first! I hope to keep working in the music business. Maybe not quite the same way as now, maybe writing and producing for others for instance. I have had other great proposals, but I can't be involved with everything. I did present a breakfast TV show. Those are new challenged which scare me, but they always turn out well. I hope to explore other areas in the future. But I will always be involved in music somehow. 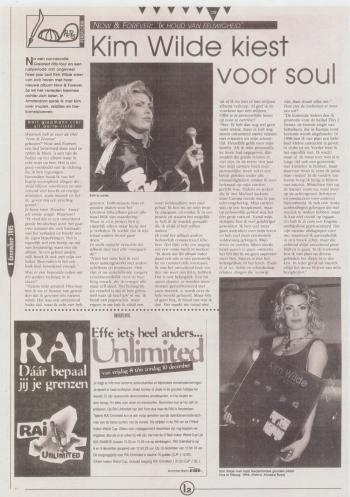