Kim Wilde is like reborn: 'I have buried my past!'

Kim Wilde is back! and how! For her new album Now & Forever and the new single Breaking Away the British singer swapped her image of the ultimate popdiva for that of a souldiva! Although she has worked in showbiz for many years now Kim still backs away from pretenders and glitter and glamour. And that's for the best...

You consciously chose for a different style?
Yes. My new cd has become a dance/r&b/soul record. One and a half year ago I started on it. I was listening a lot to records. Aaliyah, S.W.V., Mary J. Blige, that sort of thing. I wanted very much to make such a record myself. I have always been a big fan of soul ever since I was a child. I loved Aretha Franklin, Chaka Khan and Stevue Wonder. For the first time I've come out to show my soul roots.

Did you want to come back as a reborn Kim Wilde after your Greatest Hits album?
I felt it was high time to leave my past behind. The Greatest Hits album scored very well and I have also toured with it. At the end of that tour I said to my brother Ricky: I think it's time to choose a different direction and leave the past behind me. I will never turn my back on my past completely. If I would tour I would obviously play some of my old hits, although I can't promise I would still do 'Kids in America', hahaha. That song is boring me by now. I mean, I have sung it with pleasure during the last tour, but I felt it had to be over and done. I am not a 'kid' anymore, so that song makes no sense. I have more selfconfidence now that I'm older. I make the music I like and when people don't like it, it's their problem.

Is your father Marty, a famous singer in the old days, important for your career?
He is not actively involved in my career, but I do always ask for his advice, and I value his opinion a lot. At the moment he's writing a musical that will play in Liverpool soon.

Is that something for you, a musical? You wouldn't make a bad Evita.
I agree. But Madonna has that role already and I am satisfied with what I'm doing now.

You're not that ambitious?
Well, I could have already played in a few movies if I would have wanted to. No fantastic movies, so I let them go. What sense is there in making bad movies?

You're in the business for 15 years now. Was there a period in which you weren't happy?
I think I have been unhappy on lots of occasions. The only thing that kept me going was my enormous love for music and singing. I was especially unhappy when I was in my mid-twenties. I was so scared that my career would come to an end. When I was doing it for ten years I understood that it didn't end and that I should start to enjoy it before it was too late.

You are someone who's always shunned party's, glitter and glamour.
That's true. Sure, I do like the glamour side of the business, but only when I'm working. That's just part of it. But at home I turn off the popstar switch and am myself again. I have never behaved like a popstar either. Why should I? I remember very well that Michael Jackson, while I was on tour with him, rented a whole amusement park in Denmark so that he could walk around there. That seems terrible to me. No, the day I start to notice that I like that kind of thing, I'll stop immediately! 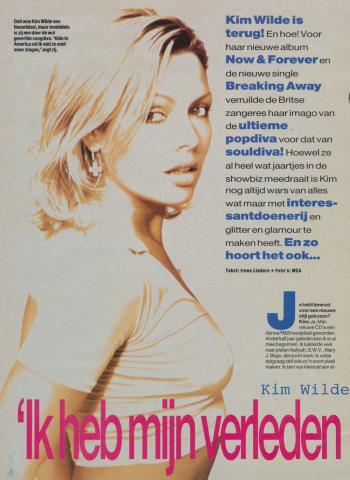