Kim Wilde used to find herself automatically reaching for the wine bottle to counter the dark thoughts that threatened to wreck her life. She openly admits that fame was more than she could cope with. 'I used to wake up under a terrible black cloud, wondering what the hell an unemployed pop star would do', she sighs. 'It stopped me enjoying the moment. Fame brought enormous pressure on a very young pop star and I saw other careers disappearing and wondered what I would do if the same happened to me.'

These days, you have tough job believing that sh ever sought solace in drinking and comfort food, leaving her overweight, out of shape and depressed. Perfectly turned out in tight trousers and green satin shirt, she shows off a curvy figure toned by hours in the gym. Compliment her on her studiedly casual appearance, which sets her off better now at 34 than it ever did in her early 20s heyday, and she accepts it with a grin. But there's no false modesty - she knows she looks great.

For all that, Kim has given up what has turned out to be a fruitless quest for Mr Right, which left her unfulfilled and needlessly miserable. For now she is concentrating on her career, back on track with an upbeat soul album, 'Now and forever', much of which she has written herself. And, she confides, she is making a point of not taking herself too seriously.

'I have a T-shirt that i wear to Tesco with "pop star" written on it. I wear it with pride. So many people in the industry would rather call themselves anything else but I think it's healthy to look at it all for what it is.' She traces her disaffection right back to the early days of her success. Although as the daughter of 50s idol Marty Wilde she accepted fame as if it were part of the furniture, she was 19 when 'Kids in America', penned by her father, hit the charts, and 25 when 'You keep me hangin' on', the old Supremes number, reached number one in the US. While in time-honoured tradition she partied hard, she professed to being an old-fashioned girl desperate for marriage and children within a few years. She began to crack under the strain of trying to make all her dreams come true. 'I used to drink a lot more', she admits.

Now she sees clearly that a lot of the pressure she felt came from within. 'I regret that I spent my 20s wasting time worrying about when I was going to be happily married with kids. Part of me wanted what my parents had, a great family life, but I realise now that I was just fulfilling other people's dreams. I think kids would be a blast, but I won't have kids if I don't meet someone who's right. I don't often meet men I can feel for in a sexual way. That spark is so rare.'

Here is a clue that she may have been burned in what had become a high-profile quest for the man to share her life. A two-year relationship with a student a decade her junior, Rupert Kenyon, was interrupted for an affair with then Big Breakfast presenter Chris Evans, which began when Kim sat in for a temporary stint on the show. 'We clicked instantly', she says with a shrug. 'There are some people you meet and you know straight away that they are going to be in your life and be special. He was - and is. I always trust my intuition with people and I've never been wrong.'

Her current commitment can be attibuted to a very early midlife crisis. Hitting 30 with a bang and finding herself overweight and unhappy, she decided to change the way she lived. She moved to a converted barn near her parents' home in Hertfordshire and started to take an interest in her health, both physical and emotional. 'When you're young, you take your looks for granted - and because I'm tall, I'd always carried any extra weight quite well. But as you move into your 30s you have to try a bit harder. I was making music I was proud of, I was proud of my career - and I wanted to be proud of myself as well.'

Together with her old school pal, Sue, she now attends her local Hertford gym two or three times a week, for an hour of aerobics or Step aerobics - and has a personal trainer who takes her through muscle-intensive exercise. When she has time for neither, she goes roller-blading. 'I got a pair last Christmas. They're great for your legs and bum.' For the past six months she has also stuck to a low-fat diet, and has lost some one and a half stoes in the past couple of years.

She still enjoys a drink. 'I'm sensible now, though. I'll have a couple of glasses of wine a night, tops - Australian white - or a few Sol beers. I've really knocked all that on the head. I do everything in moderation these days.' And that includes worrying about her love life. 'This may sound odd, but I've always felt single. I've alwaysbeen a very independent girl with a lot of great friends. I know you can't cuddle up to friends - although I have tried on occasion - but I've got a really good life, so the last thing I want to do is compromise in my private life. I know I will find someone to spend my life with one day. I just have to wait and see what fate brings.' 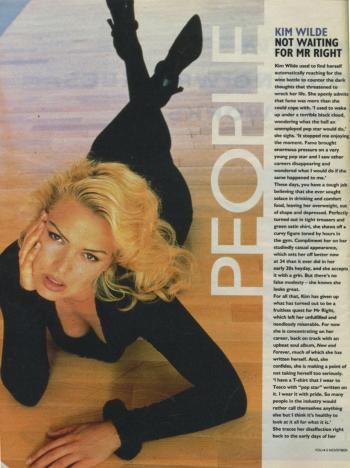 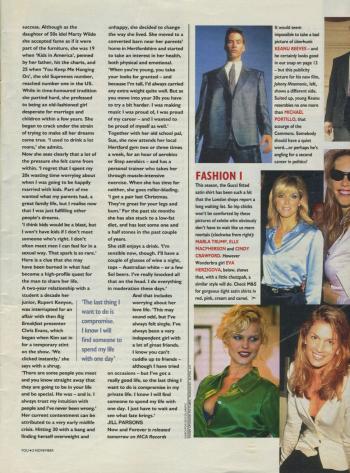