In her skin-tight red top and regulation rock chick black leather jeans, Kim Wilde doesn't look much like anyone's mother. Yet the girl who sent Chris Evans spinning will play the part - in fiction at least.
She is joining the cast of Tommy as Mrs Walker, the mother with a libido wound up tighter than her apron strings. Playing mother to 19-year-old Paul Keating is an interesting departure for the woman who has fuelled thousands of teenage fantasies since her first single, Kids in America, hit the charts in 1981. This is the same Kim Wilde who dumped all her wide-eyed youtful ambitions of having a husband and brood by the age of 30, to be a super-fit, rollerblading career woman about to hit 35.
Kim is successfully single and wants everyone to know it. "Believe me", she says, "finding true love is the last thing on my mind at the moment."
She accepts that there is at least as much interest in her love-life as her music. She has just released a new album, Now And Forever, but stresses that there is nothing to report on the romantic front. "If I met the right man, that would be wonderful. I would be delighted. But I haven't - and I'm not actively looking."
She feels she is well able to play the caring mother. "I'm perfectly equipped to deal with children. All men are children."
She says it with a wry smile, but you can't help wondering if past experience has burned her. A two-year relationship with Calvin Hayes of Johnny Hates Jazz fell apart, as did an affair with car dealer Paul Holmes. At least her career ran smoothly, Thoughout the Eighties she was one of Britain's best-loved pop icons. She had hit single after hit single and was named Best British Vocalist in 1983. In 1986, her version of the Motown classic You Keep Me Hangin' On gave her an American Number One. Two years later she supported Michael Jackson on tour, although it was not the start of a friendship.
"I hardly saw him", she says. "He was far more comfortable with my kid brother Marty and my sister Roxanne. They spent time with him and he was very good with them, but it was still a bit odd, hearing all about him from them."
Reaching 30 hit her hard. As her career and personal life faltered, she became overweight and depressed. She admits that, although not an alcoholic, her reliance on a liquid prop worried her. "I just really liked my wine and found myself thinking about it a few more times than I ought to. I decided to put my life in order."
She shed a stone and a half, sold her London flat and moved into a renovated barn a stone's throw from her childhood home. She also embarked on a new romance with student Rupert Kenyon, 10 years her junior. They met when he serenaded her with a spoof version of Kids in America during a skiing holiday.
He, like his successor in her affections Chris Evans, has remained a friend. "All my boyfriends have been great people. A lot of them are still in my life as friends. I don't regret my time with any of them. It's just that sometimes your lives end up going in different directions."
A very different Kim has emerged from the years of unhappiness. "In a way I'm glad it happened, because I'm a stronger person now. I can see how many great things I have. I have a family close by who are really supportive, my own recording studio and my dream home in a lovely village in the country. I can wake up and hear the birds singing. I don't worry any more about when I'll get married or when I'll have children. These are things I thought I should be bothered about in my twenties but now I don't worry, I'm a great believer in fate and I know that my life is going to be great. I don't think about the future too much, I live for today."
Which is why taking on the showstopping role of Tommy's mother won't faze her. Kim knew the songs of old, from when her father Marty first played her the original Who album when she was 12. "It was always a real favourite at home. When the news about Tommy dropped through my letterbox, I knew I could murder those melodies."

She still had to audition for the part of Mrs Walker, made famous in the Ken Russell film version by Ann-Margret. "I was very nervous because I had never auditioned for anything in my life before. But I though that, if I'd performed with Michael Jackson and presented the Big breakfast, I could do anything. I'm not afraid of a challenge. Besides, it's not such a massive leap. It's not as if I'm taking up landscape gardening. Singing is after all something I know I can do. And it's not as if I'm relinquishing my pop career. I've got an album out, a new single in January and I'll be promoting them right the way through the run of Tommy, which is a year's work. I'll just have to juggle it all."
She identifies with the story of Tommy, the deaf, dumb and blind kid who becomes an important figure. "I like what it says about the ambiguous nature of fame. I know only too well how disillusioning it can be."
After the years of jetting around the world, living an unreal pop star existence, Kim has found herself yearning for a spell of stability. "I wanted a job, a regular job. I felt very strongly that I needed some continuity in my life. I wanted to hang out with my friends, see my family and have some kind of routine. More than anything, I wanted to be able to come home every night and sleep in my own bed." 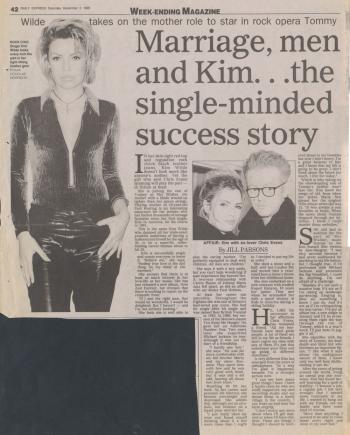