You can almost picture MCA moguls discussing tactics. What's the best way to garner credibility and shed an image as an Eighties pop starlet? A spot of jungle? Trip-hop? A duet with Nick Cave? Nope - it's soul, Perennial, mass marketable, guaranteed heavy rotation. And - eureka! - as Kim herself says on the press notes, "The soul girl within me never really went away."

But Aretha she ain't. Songs along the lines of True to You, High On You and You're All I Wanna Do, albeit aided by slick production values and soothing, sugary vocals, are delivered perfunctorily and lack the requisite feeling intrinsic to the genre. When she sings "I'm holding back the emotion" on Hypnotise, it's easy to believe her.

A pity, really, as Wilde's sassy tackiness was what made her so endearing in the first place. So, just when we might've expected her to pop up behind the bar in Eastenders, she's decided to hang on in there and gun for an inevitable services to the industry award. Smooth, seductive numbers such as C'Mon Love Me replace the yelps of Kids in America, and it's only the effervescent Breakin' Away that recalls the Wilde days of yesteryear. Self-penned lyrics, with their heavy reliance on predictable rhyming couplets ("Took me by surprise/When I saw the passio in your eyes") are a formulaic take on love in its various guises - obsessive and unrequited being the pattern here. Not that Wilde even gets remotely upset about it all.

Now And Forever is so easy on the ear, so ultimately forgettable, that this reviewer got halfway out the door before remembering that it was still on the stereo. So no doubt it will sell by the million. 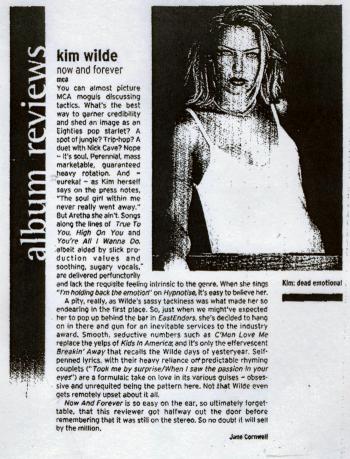