1981: The Bardot of Rock she is called and she scores world hits with Kids in America, Cambodia... 1995: Kim Wilde is 35, more beautiful than ever and back in the spotlights! For Kim's biggest successes you have to go back 15 years in time, but whoever thinks she regrets that...

Behind the scenes of Tien om te Zien I am quickly sent to the dressing rooms. I am over an hour too late. Kim Wilde is sitting before a mirror with onehundred little lamps in a bright blue blouse of Chinese silk and is colouring her nails with a bright white. she goes on as she tells me: "I am just back from Liverpool, where I went to the premier of the musical my father (Marty Wilde, he used to be a celebrated pop singer, JH) directs. There was a standing ovation, fantastic! I was very proud of him.

So your father is still busy with music?
Oh yes, next year he going to do about 80 shows, so he is still a performer and a songwriter. He is 56 now... I don't know whether I will be doing this when I'm 50 (laughs).

The style of your new CD is so very different from the music I know from you, that I didn't even recognise your voice.
I just wanted to make a cd with music I'm listening to myself nowadays.

Aren't you afraid your fans will leave you when they hear this cd?
(astonished) No I'm not. I think that my fans have developed through the years with me. And they are strong songs, with a bit of R&B filtered through them. With some 'dance' music the song itself is forgotten and the 'beat' is taking center stage. That's not what I did, we really took care on 'songwriting'. But we'll see. I have made this cd for myself, you know...

A few years ago you performed in support of Michael Jackson. Suppose you are to choose your opening act...
(seriously) It doesn't matter, as long as he's cute. So that I can just sit there and watch him be pretty. Idon't know. I can't place myself in that situation.

What I realised when I saw you, is tha tyou have lost quite a bit of kilos. The seven meagre years?
I have lost weight, yes. But I have enjoyed myself over the last two years. With the promotion and 'The Greatest Hits Tour' we have been in Australia, Japan and all over Europe. My brother Ricki went along and we performed in big clubs and small theatres. A fantastic time. Until I was so tired of my own past at the end. It was driving me nuts! I thought it was time for something completely different. Together with a few friends I wrote the first song, Life and Soul, off my new album and I played it to my producer. I said: "This is what I want and I hope that you think it's interesting, because otherwise we need to have a serious talk..."

Where did you write your cd?
The executive producer, steve Wolfe, was ver yinterested in me and took me places. So we ended up in New York, where I was introduced to a lot of songwrites with whom I experimented until we had a song. After ten days we had some seven, of which a few are on the CD. And the others we left behind, we are searching for someone to cover them. I am ambitious, I would like to let someone like Toni Braxton sing them. I would love to write for other artists, that'd really give me a thrill.

Are you going on tour soon, too?
We may do a club tour, so not completely live, but with a whole act with dancers. It's motly about how you dress and your attitude. Yes, a bit like Madonna's Vogue, but then with me and my music. I have planned such a gig on my birthday, November 18, in a big gay club in London, where they play great music. You can dance there without being hassled.

You often come in London but do you still live there?
No, I live in Hertfordshire, a small hour's drive from London. On the countryside, I'm a country girl.

Do you live together with someone?
No (sighs).

Do you get lonely from time to time?
I don't work ablone, at the moment I'm here with my dancers and writing, recording and promoting is also done together with others. Sometimes I just need to have time to myself. But you're right, sometimes I do get lonely. Because being famous and single can isolate you as a woman. But it also has made me stronger.

Would it be hard to live together with you?
No, not really. I am very honest, I don't flirt too much. I would be a good girlfriend, I think. A lot of men seem to think I am completely unapproachable. But you know, that's their problem. When they don't have the guts to talk to me I don't want them at all.

You're 35, so your biological clock is starting to tick. Would you like to have a family?
What use is there to want that. I will think of it when I find the right man. But I'm beginning to wonder if he exists (laughs). Things happen at the right time and for the right reasons, so I'm not too worried about it.

Never met anyone of whom you thought: that's him!
(sighs) Yes, one time I thought I'd found Mr. Right. (flatly) But I was wrong...

Don't you think your fame scares off people?
I don't know, I'm really open about it. I don't close off from my surroundings. Except when I'm tired like today, so that's why I'm in this room right now.

It's just as well, because I want to show you something. (I take out an old 'Oor' from April 7 1982 with a very young Kim on the cover.) There's a rumour you weren't allowed to smile at the time to keep up your cool image...
But that wasn't true! No-one told me not to laugh. I just hated to smile in front of photographers. Especially when they called out: "Smile Kim!". I just thought: why? It should come from the inside. So then I got even angrier and looked extra mean. I did what I wanted then and that's never changed.

Back to your successful years. They probably were profitable for you. Are you rich?
(Flatly) Yeah... yeah, I have a lot of money (bursts out laughing). I know I am becoming a rich old woman, but the most of my money is going right back into music. And I don't have any fancy cars, no exclusive taste and I never go out shopping. But I do spend money on presents.

Is there a place where you can go out rollerblading without being spotted?
Sometimes I go to a big parking lot with friends, in the weekend when there are no cars. There are also bunches of children skating around there too, learning tricks and having fun. One time there was this boy who came skating alongside me and I asked him: 'how old are you?' and he said 'five!'. And he went: 'How old are you?' And I (grumpy): 'Thirtyfive'. That was so sweet. He didn't know who I was. All that he knew was I was this crazy old woman, who goes out rollerblading on a parking lot!' 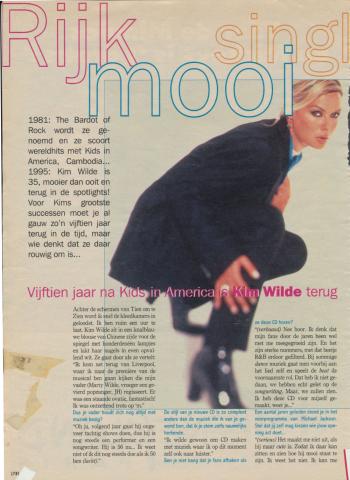 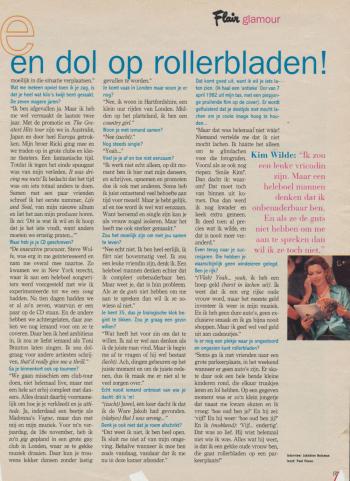