Wilde about the boys

'I do have a weakness for younger guys', says Kim, 'but my parents make love more often than me...'

Kim Wilde looks good. Sexy, steamy, sultry - the words that have been used to describe her during a 14-year career still apply. Which makes it all the more remarkable when she reveals that her 54-year-old mother has a more active sex life than she does.
"My parents make love all the time", says this slim, full-lipped blonde in a pale blue blouse and matching nail varnish. "They're still in love. I'm so jealous". For a decade, we've read about 34-year-old Kim's torturous love life. Now she feels she is ready for a partnership as durable as that shared by Fifties rock'n'roller Marty Wilde and his wife Joyce - something Kim has always craved.

"In the past, I've not been healthy enough for a lasting relationship because there's been too much to sort out in my own head." That hasn't stopped her indulging in a string of well-publicised affairs over the years, most notably her brief, passionate romance with Chris Evans. Kim says she still wakes up with Evans - listing to his morning Radio 1 show. "I think he's brilliant. He's very funny and I'm a big fan". But Evans is still a ticklish subject.
"I'll have to put my sunglasses on while we talk about this", says Kim, covering lively blue eyes in purple, designer shades.
"We had this mad thing, then it came to an end. We're still friends, which is great."
Friendly enough for him to play her new single, Breaking Away, on his show? Even more ticklish, this one. "Radio 1 aren't playing it", she pouts. Couldn't she give Evans a ring and call in a favour?
"I'm not going to tell you about that conversation", she says, those sunglasses now coming in useful. An unusual aftermath of the Evans-Wilde affair is Kim's friendship with Chris's wife, Carol.
"We met at a hen night, got chatting and realised we had more in common than Chris. We hit it off straight away. Strange life, isn't it? I'm going to be a guest on her show on Talk Radio and I've just been on the Dutch version of Don't Forget Your Toothbrush, as well."
Two other lovers along the way have been a decade younger than Kim. "I also had relationships with men my own age", she says coldly. "But I do think younger guys are very, very attractive. I have to admit it's a weakness. I look, but I rarely touch. Why shouldn't I? Men can look at pretty young women."
But muscles have no great appeal for Kim. "Im not into bodies, I'm into brains. And I like really scruffy men. Smart clothes and muscles turn me off."
There is, of course, more to Kim than a string of love affairs. There has also been an up-and-down pop career, which has seen her sell 11 million singles and eight million albums. On the eve of the release of her 10th album, Now And Forever, she can claim the distinction of being among Britain's best-selling female solo singers.
Kim brightens and removes her sunglasses to talk about a career which several times saw her on the brink of crossing from mere stardom to superstardom. Is she disappointed that she can't truthfully write Megastar on her passport? Mention of Madonna and Michael Jackson makes her answer with an empathic No.
"I don't want to be a superstar. You have to give up so much. I like bing a little star. The freedom I treasure is the freedom to shop at Tesco." It was supporting Michael Jackson on tour in 1988 which first made Kim question her star status. "I looked at him and realised that wasn't the kind of life I wanted. I got very confused and I went into the big depression after that. Eventually, I realised I wanted a good career and a good life. Success for me is that balance."
She found it, but only after a long, bleak periode which saw her put on weight, drink too much and blame everyone around her. A move from London to her native Hertfordshire in 1991 aided her recovery. She still lives there, a few miles from her parents, and insists depression is no longer on the agenda.

"At 30, I was selfdestructing. Now I'm very positive, I have a healthy lifestyle, I eat well and I'm much happier." She shivers at the downside of fame - obsessive fans like the New York ripper who met and even kissed her while she was doing a promotional tour. At the time, he was murdering 20 prostitutes. A husband might make the star less vulnerable, but she has no intention of rushing into matrimony. A screaming infant on her last plane journey also makes her less enthusiastic abouit having children.
"I'm still hoping to have a family one day, but it's not something I'm looking for right now. If you spend your time wishing for things, they never happen. If you just let life happen, it happens beautifully." 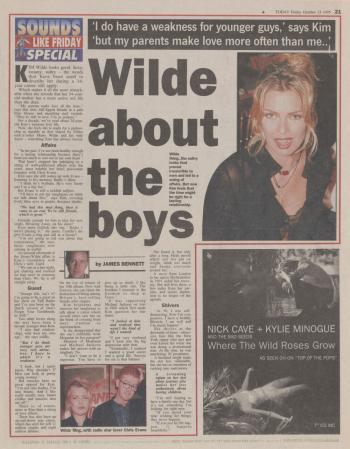