Wilde thing: Kim confesses all about the men in her life

Pouting pop princess Kim Wilde drives millions of fellas crazy... but she just can't find the right man to put the sizzle in her sex life.

And, amazingly, while she waits for her dream lover, she's wildly jealous of her parents' raunchy romance. Her dad, Fifties rocker Marty, and mum Joyce are still desperately in love, says their 35-year-old daughter. 'My parents still make love all the time', says Kim. 'I'm so jealous'.

Kim, who's set to play Mum in the stage musica lTommy, due to open in London's West End in March, still lives alone at her home in Hertfordshire. But the sexy singer admits she has auditioned her fai share of candidates in her search for romance. Men who have wooed but failed to win this Wilde thing include:

Zany Chris Evans, 29-year-old star of 'Don't forget your toothbrush' and saviour of Radio 1. The pair had a whirlwind eight-week fling after they presented Channel 4's The Big Breakfast together and Kim still has a soft spot for him. 'He's brilliant', she says. 'He's very funny and I'm a fan of his radio show. We had this mad thing. When it came to an  end, it was sad, but we're friends, which is great.'

Legendary rocker David Bowie, 48, bowled Kim over when she supported him on a UK tour just before he met future wife Iman. 'He seemed lost and lonely at the time', she says. 'He was lovely to me - like a big brother. I had a serious crush on him.'

Heart-throb Mick Hucknall, 35, has also been linked with Kim, the Simply Red star happily counts her among his ex-loves.

Student Rupert Evans - then 23 - dated Kim before she left him for Chris Evans, then gallantly picked up with her again 10 months after he had been dumped.

At one time Kim was also seen with a strapping, 29-year-old ski instructor in the Austrian Alps, but a friend insisted there was no romance.
Ask Kim about her younger men friends, and she replies frostily: 'I do NOT date toy-boys. I happened to have relationships with two guys who were much younger than me, but I had others with men my own age.'
Then she drops the indignant act and purrs mischievously: 'But I do think younger guys are very, very attractive. I have to admit it's a weakness. I look, but I rarely touch. Why shouldn't I look? Men can look at pretty young women.'

As well as Bowie, Kim supported Michael Jackson on tour. But you can tell by her grimace that Lisa marie Presley is welcome to the man she is soon expected to divorce. It was the example set by Jacko that made Kim reassess her prorities at the beginning of the Nineties. 'I looked at him and realised it wasn't the kind of life I wanted', she says. 'Now I'm very positive. I have a healthy lifestyle. I eat well. I work out. I'm much happier.' 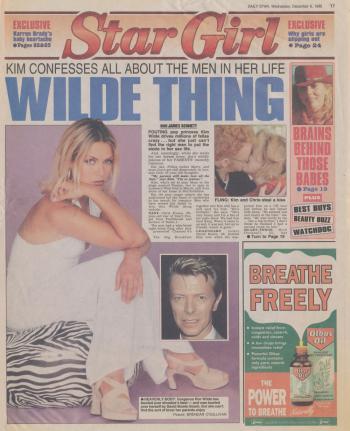