Twenty-seven years ago Pete Townshend, the guitarist of the now disbanded pop group The Who, wrote the rock opera Tommy. A musical adaptation by Tommy made four years ago premiered in London last week. “Tommy is different from all other musicals. Tommy does not meet the standard structure of a story that is interrupted by songs."

The rock opera Tommy is a cat that has seven lives. First there was the double album of rock band The Who in 1969, written by guitarist Pete Townshend. This was followed by the performance at the historic Woodstock festival (in 1969), the ballet (in 1971), the concert performance (in 1972), the film (in 1975). And four years ago, the song cycle was reborn for the umpteenth time, this time as a musical.

The co-production of the British Pete Townshend and the American director Des McAnuff immediately caused a sensation on the American Broadway. The St James Theater in New York was sold out for more than two years. After the drink, Townshend had overcome his disgust with Tommy by working on the musical. He had finally accepted that he would be approached by this youth work all his life. "Rightly so," said the balding rock star, "because it's fucking brilliant."

After 27 years, Tommy returned home this week. That is to London where Townshend spent his traumatic childhood that he has so apocalyptically portrayed in Tommy. Tommy makes his debut at the West End. It is also the London debut of Endemol Theater Productions, the favorite toy of Joop van den Ende. The 36-year-old Robin de Levita who already has fourteen musicals to his name in the Netherlands, Belgium, the United States and Great Britain acts as executive producer.

The musical Tommy is spectacular from the first tones. The first chord immediately flattens the murmuring spectators, while the lights are still on, and presses them with their backs against the seats, like a sports car tearing away. Then they have to grab hold of the armrests to be able to follow the murderous pace, and not to be lurled by every unexpected curve that the performance takes.

Tommy is different from all other musicals. Tommy does not meet the standard structure of a story that is interrupted by songs. For sparkling dialogues and in-depth characters you don't have to go to Tommy. In this musical, spoken text is kept to an absolute minimum. The story is told by a constantly surprising combination of music and images. Tommy is one long video clip, a moving comic to the sound of a howling Stratocaster guitar.

27 years ago the rock opera did not want the story. Townshend must have been in a delirium when he came up with that dragon about a boy who is beaten with deafness, dumbness and blindness when he sees his father shooting his mother's lover. That boy is also abused by his dirty uncle Ernie and harassed by his sadistic nephew Kevin.

Only behind the pinball machine can he escape the depressing reality. With his stunning pinball performance, he commands respect. He grows into a 'pinball wizard', a wizard behind the pinball machine. His miraculous healing and the idolatry that befalls him - like a celebrated rock star, the pinball machine has always been the symbol of the lead guitarist - give him an illusion of freedom. But when he notices that he is also shamelessly exploited as a celebrity, he returns to his family, to normal life, where he finds true freedom.

It is not the story that carries Tommy, but the still surprisingly fresh and contemporary music of Townshend, which fortunately has retained its rock character and has not been arranged too well. The staging also plays a major role, which, together with the fabulous lighting, the beautiful scenery and the economical use of the most modern projection, computer and video techniques, creates a dazzling spectacle. A highlight is the moment that the entire theater changes into one flashy pinball machine.

With Tommy, a roll-out without stars was chosen. That works out well. The 19-year-old title role player Paul Keating, who was still behind the counter of a supermarket a year ago, sings like a rock star, and embodies the ideal combination of charisma and vulnerability.

The British media has received the musical Tommy with undisguised enthusiasm. The Financial Times compares the performance with a crazy 'trip', 'hallucinarian in its excess', 'qualitatively comparable to no other musical in the West End'. The Daily Mail praised the 'stunning settings and the kaleidoscopic light effects'. And The Independant wrote this morning: "Tommy is the best concert, the best fireworks and the best drug strip you've ever experienced, all in one."

With success in London, the musical Tommy will go on tour in Europe next year. The production will then also be shown in Carré. 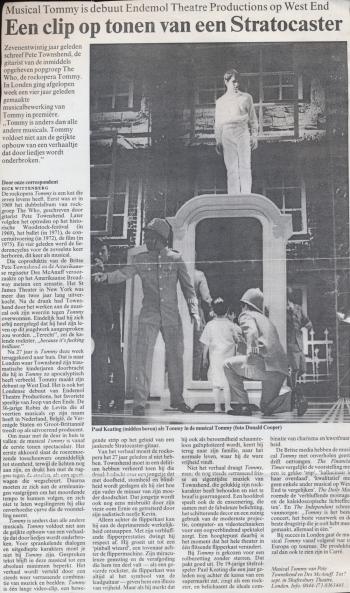