People lined the streets while young children waved and cheered. Traffic came to a standstill as an expectant crowd of paparazzi and Sunday strollers waited at a small village church.

They had come to catch a glimpse of the wedding of Codicote songstress Kim Wilde, 35, and Hal Fowler, her co-star in West End musical Tommy, at St Giles Church on Sunday.

Wearing a classic white dress and accompanied by her rocker father Marty, she was taken from The Globe pub to the Bury Lane church by horse-drawn carriage.

Landlord Graham Harrison said: "it's marvellous for the vicarage. Kim could have had this wedding anywhere she liked, but she chose to have it in Codicote, in the little village church. Everybody is pleased about that."

Looking radiant, Kim declared merrily to her three bridesmaids, after posing for photographs :"Right, let's go and get married."

Composer Sir Tim Rice was among the 160 close friends and family at the hour-long ceremony. Hal, whose real name is William, said: "It was a wonderful service, perfect. It's great to be married."

New father-in-law Marty added: "I was more nervous than the groom. It was a lovely service. I've got to make a speech at the reception and I'm really nervous about that."

An ecstatic Kim, who married under the name Kim Smith, said it was simply "fantastic".

The newly-weds, whose romance began seven months ago, hosted a marquee reception at Kim's parents' house in Tewin Wood. The bridesmaids were Kim's sister Roxanne, 17, and nieces Scarlett, seven, and Jasmine, three. 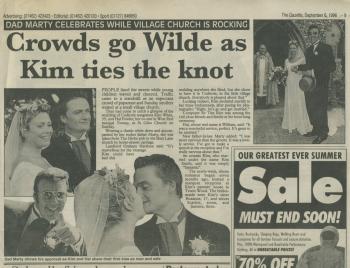 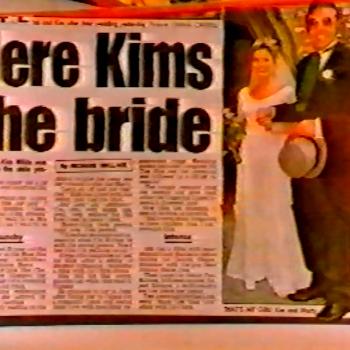