Gorgeous Kim Wilde will wed Hal Fowler, her co-star in the musical Tommy, after a whirlwin two-month romance. The former girlfriend of Radio 1 star Chris Evans agreed to marry Hal after he flew her to France for a romantic day trip on Monday.

The couple plan to tie the knot just as quickly - theyhave set their hearts on a late summer wedding. Hal, who plays Cousin Kevin in the hit West End show, paid £1,000 to hire a four-seater private plane to take Kim away. They flew from a small airfield in Elstree, a few miles from Kim's luxury convered barn home to Calais at 9am on Monday. Hal proposed at lunchtime and in the afternoon they scoured local shops for an engagement ring.

But after more than two hours they could find only one jeweller's shop - which luckily had two rings that fitted. Kim then phoned her 16-year-old sister, Roxanne, to break the news as her parents, rock 'n' roll star Marty and former Vernon girl Joyce Baker, were not around.

By 8pm the love-struck couple were back in Britain - although they are not due back on stage until this evening. Kim, who plays Tommy's mother Mrs Walker in the show spoke of her love for Hal recently: 'I'm very happy. I'm very relaxed for the first time in many, many years. Everything feels just perfect right now. Really perfect.'

But she said then that she was in no hurry to marry. 'I'd rather be unmarried and with no children when I'm 80 than be with the wrong person. I think white weddings are nice parties but what's important is how people can get on.'

Kim, who lives near Stevenage, Herts, has often had Hal, 28, to stay at her house. But when both are on stage performing 'Tommy', she stays at his central London flat.

Last night Kim's father Marty, 57, said: 'No date has been set but the wedding will take place in the very near future.'

No wonder they are in a hurry. Hal would have to be dead, dumb and blind not to jump at a chance like this.

Kim has left a string of broken hearts behind her since she first found fame in 1981 with 'Kids in America'. She had two long romances with musicians - one with sax player Gary Barnacle, the other with Johnny Hates Jazz drummer Calvin Hays. Both broke up after two years.

She then surprised friends by having a year-long relationship with student Rupert Kenyon, who was 11 years her junior. Two years ago she left him for Chris Evans, but their affair burned out after six weeks. 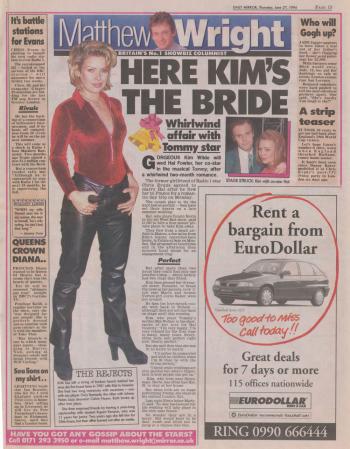