Pop star Kim Wilde finally married the man of her dreams yesterday. Afterwards the blonde singer looked lovingly at new hubby Hal Fowler and said: "I could not be happier. I have found the man of my dreams.
"I couldn't wait to be Mrs Fowler and I can't wait to be a mother."

Her wedding comes after a string of failed romances - including a fling with DJ Chris Evans. Kim, 35, wed 2J-year-old Hal - her co-star in the West End musical Tommy - at StGiles's Church, Herts. The star of hits like Chequered Love dumped her raunchy image for a stunning white gown and train. Two hundred wellwishers cheered as she arrived by horse-drawn carriage. And proudly waiting in the church to give her away was her veteran rocker dad Marty.
"Let's go off and get married," Kim had joked with Hal before they tied the knot. And later she enthused: "I'm very, very happy and very, very relaxed for the first time in many years. Everything feels perfect right now. Just perfect. I'd rather be single and unmarried when I'm 80 than be with the wrong pereon. Now I feel like I'm walking on air."
It was true happiness at last for Kim who fell for Hal seven months ago when they met in Tommy. He proposed to her in June after fiying her to Calais for a romantic lunch and sealed their love with matching engagement rings. Wedding guests included composer Sir Tim Rice and the ceremony was followed by a f 20,OOO reception. The couple emerged from the service and gave each other two lingering kisses beneath a flowered arch.
Now they are planning a fami1y as soon as possible. "Hal's even more desperate to have children than I am," revealed Kim.

She had a fling with saxophonist Gary Barnacle before falling for Calvin Hayes, drummer with the pop band Johnny Hates Jazz. Then came car dealer Paul Holmes, foliowed by student Rupert Kenyon, a millionaire's son who is ten years her junior. Two years ago she had a s1x-week "more lust than love" affair with DJ Chris. 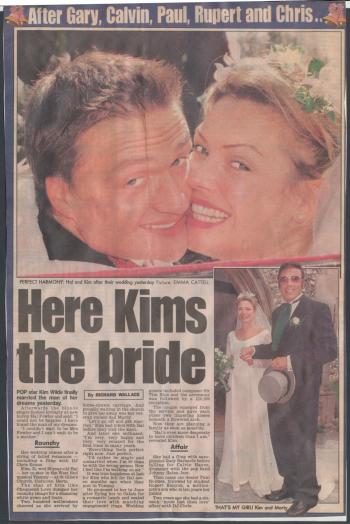