I don't need to diet any more

She was a pop pin-up in the Eighties and is now making her name as a stage actress, but the pressure of fame took its tolion Kim Wilde.

With her good looks and neat figure, it's hard to imagine pop singer Kim Wilde was once overweight. But five years ago, she hit rock bottom. With a string of broken love aftairs behind her and a career in limbo, she was hitting the bottle and piling on 1½ st. of excess weight.
"I really let myself go," recal!s Kim. "I was pigging out at lots of restaurants, drinking far too much and getting no exercise. Thankfully, l never got to the point where l was worried about alcoholism, but it was all very fattening and took its toll on my weight."
Kim now feels she understands why she turned to food and booze tor comfort. "Not taking care of myself was all tied into pent-up depression. I didn't associate the two until some time later. It isn't until afterwards that you can see how unhappy you must have been, how it affected the way you projected yourself and how people reacted to you."
Kim burst onto the music scene in the early 80s with the huge hit Kids In America. One day she was Kim Smith, the art student, and the next she was an international star selling millions of records. Kim reckons that it was her al most overnight riseto fame which caused her depression ten years later.
"I concentrated on my career during my twenties. Instead of facing up to things in my life, I put them on the back burner and threw myself into work. l got very good at running away."
By the time she reached 30, Kim slowed down and stopped running. "I got my act together. I told myself that I wasn't going to carry on like that tor the rest of my life."
A first major change was to move away trom her flat in north London to a converted barn in the Hertfordshire countryside. "London's so distracting. There's always something going on - another dinner, another party. There was always a reason to go out and get blasted."
Moving out of London, says Kim, helped her stop drinking. "I took it slowly - there are no quick fixes tor things like that. In Hertfordshire, I've discovered much healthier pursuits - I spend time outside in my garden and go for long country walks. I've joined a gym, too."
Kim decided to live in Hertfordshire to be near her parents. Dad Marty Wilde was the Fitties heart-throb whose big hit was Teenager In Love. Her mum is Joyce Baker - a singing Vernon Girl. Well-versed in the stresses and strains of the music business, Kim acknowledges that her parents played an important part in her recovery. "I had a lot of support from the people who love me," she says. "With their love and my determination, I got better."
Having regained both her physical and mental health, Kim's career is now clearly back on track. Earlier this year she was given her first major acting role in Pete Townsend's revival of the award-winning musical Tommyat London's Shaftesbury Theatre. Kim plays Tommy's mum. She isn't daunted by the challenge. "I love the show and look forward to each performance." But she does admit that her diet and fitness regime have taken a back seat. "Until Tommy, I was going to the gym as weil as doing aerobics and step classes. With eight shows a week, it's hard to find the time to exercise."
Work has affected her eating plan, too.
"My diet's gone a little bit wonky since I started in Tommy. I have bran flakes and a banana for breakfast and in winter, I like porridge. Lately, I've been having bacon sandwiches.
"I don't like to eat before evening shows, so breaktast is a good time to eat a big meal - a brunch-type breaktast gets me through the day. When l come off stage at 10.30pm I'm hungry, so l end up eating quite late, which I realise isn't ideal."
In spite of the difficulty Kim experiences in sticking to her tried and tested healthy eating plan because of her work hours, she believes her metabolism has changed. "I don't seem to have to diet any more. This could be because of the tough regime of eight shows a week."
1(im has changed her whole approach to food. "My attitude to the way I eat has definitely altered. I think you have to monitor your own reaction to food. We all have to listen to our bodies. It took me years to start to listen to mine, but now that I do, I've noticed a vast improvement in my skin, my body, my health, my head - everything in fact."
When she has the time, Kim loves cooking. "I find it therapeutic and rewarding to make the effort, especially if I'm doing it for other people. If I'm cooking pasta, I try to use pesto, fresh Parmesan and sun-dried tomatoes from a good Italian delicatessen. I'm not a fan of ready-meals or convenience food. I'd much rather eat something like baked beans on toast - filling, low in fat and healthy for you."
In her 20s, jeans and T-shirts were Kim's trademark. Ten years later, her tastes in clothes, unlike food, haven't changed. "I'm still that girl. I don't buy expensive clothes - I'd rather spend the money on a hand-embroidered cushion for my house."
Kim may be casual about clothes, but she takes her skin seriously. "Every model swears by straightforward things like lots of sleep and water. I do, too. I'm disciplined about taking off make-up. I'm lucky with my skin, but I still get a few spots like everyone else!", Kim adds with a laugh, happy with her healthier lifestyle. 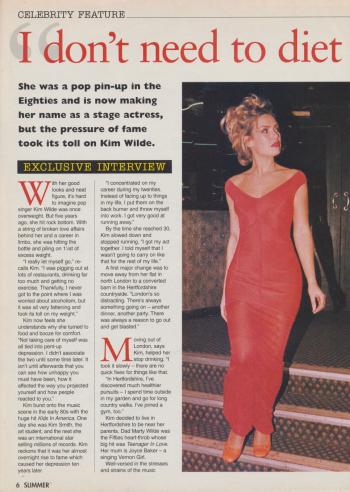 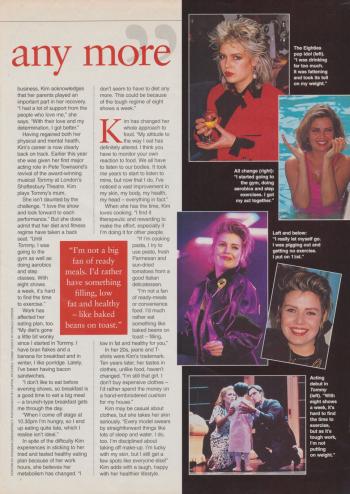