Pop star Kim Wilde took time out from her appearance in the rock musical Tommy to visit Piccadilly's Rock Circus for a hand-casting session.
The blonde singing star is currently playing the part of Mrs Walker in Pete Townsend's hit musical at the Shaftesbury Theatre.
Kim's hands were moulded in bronze on Tuesday and she'll join rock legends such as Michael Jackson on the Wall of Hands. 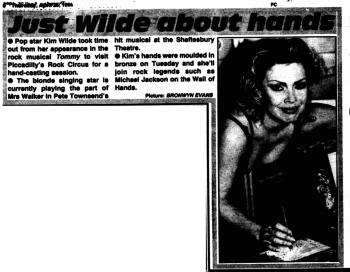