Kim Wilde is visiting Paris to present her tenth album, "Now and Forever", which contains thirteen songs. The single theme is love. Between heartaches, she displays a resolutely optimistic state of mind.

It's a a true blonde Kim Wilde who storms through the door of the Parisian palace where she resides during each of his visits to Paris. What a contrast with her last visit two years ago. She showed herself quite gloomy, standing folded on herself, reclining in a corner of the sofa. This time, the radical metamorphosis. She smiles broadly, sketch a few steps with the dancers that accompany her. Her apparent joie de vivre is really fun to see. She did not wait on any questions to explain: 'For some time I decided to be fundamentally optimistic. I feel that I am now the best moments of my life. I still think the future will be better than the past or present. I feel really strong now. '

The leather pants showcases her fine shape which she found: "I started to roller-blade. Initially, I was apprehensive falls. Violence I made, and now I'm better. I also do a little gym and working out. " His smile and her eyes are bright and the corners are painted sky blue. Kim Wilde is happy living. Yet her heart is lonely again. She has just completed a chapter of a beautiful love story with Chris Evans, star presenter of British television: "It has changed my life. Our relationship was very intense. I learned from him what he should not do. Previously, I was running problems, I did not say always the truth. now I am absolutely honest and direct. This is the first time I am also deeply affected. I did with him a very rewarding journey. "

The serenity of Kim is all the more surprising since we were accustomed to her painful breaks: "I'm terribly romantic and I pay the price. Love is often painful and destructive. I suffered much and I was often depressed." Her move to the distant outskirts of London has also contributed to the balance of life of the pretty blonde: "I moved to the countryside, not far from my parents and my best friends. When I lived in London, too many people were bothering me. My family has brought me a lot of love and encouragement. We talk a lot. My dad wisely advised me to stop  navel gazing, but to look around and face the world head on. " Her latest album, Now and Forever, her tenth, much more tinged soul music than previous albums, is a reflection of the new Kim Wilde: "The album was influenced by the last years of my life. The songs I wrote are very personal. I first lost love, then found it again. Writing is my therapy." The thirteen songs on the album speak only of love.

After fourteen years of career, Kim can boast a remarkable seven million albums and twelve million singles sold. Providing the first parts of the concerts of David Bowie and Michael Jackson, she was one of the stars of the 80s. Daughter and sister of musicians, she thought for a moment that her little sister, Roxanne, sixteen, would borrow his footsteps. She has always done backing vocals, and then she radically changed direction: "She competes in horseback riding. She is for me the most amazing person I have ever met. We really are a family with wings!"

She also says that a great event lurks on the horizon for 1996: "I'll sing every night for a year on a stage in London. I actually won the female main role of Tommy, the rock opera by the Who. At ten to eleven years, I was a fan of the album. I was listening incessantly. For this role, I had to audition. This is the first time in my life that I landed a job! 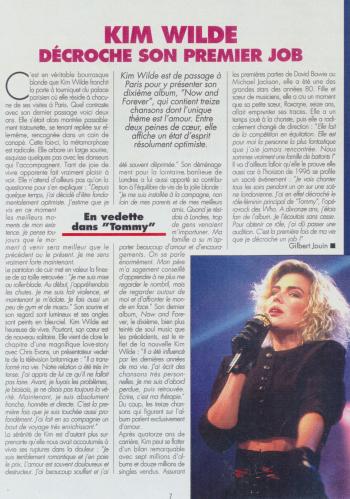