It could have been one of the showbiz events of the year when Long Crendon actor Hal Fowler married pop superstar Kim Wilde on Sunday. But the couple, who met through their West End hit show 'Tommy' decided against a star-studded media event and went instead for a family occasion.

Photographers and cameramen who massed outside the quiet country church in Hertfordshire were refused access to the private reception at the Wilde family home several miles away. But I have followed Hal's career for many years and was there as a personal guest of the bridegroom's family.

Hal, whose parents Bob and Penny still live in Long Crendon, appeared on the West End stage in Aspects of Love, Leonardo and Carousel before opening last winter as evil Cousin Kevin in the £3 million smash hit new staging of The Who's Tommy. It was during rehearsals that he first met co-star Kim, making her debut in musical theatre.

Kim, the daughter of rock 'n' roll legend Marty Wilde and his wife Joyce, has been one of the rock world's biggest names since she broke onto the 1980s pop scene with her smash single Kids in America. Hal popped the question on a light aircraft he had hired for a day trip to Calais. The pair might be big names in the entertainment world but on their big day, stagefright struck.

'I don't think I can handle this', Hal joked before the service. The Rev Jim Smith broke the ice during the service. 'There, you've made it', he declared after they had exchanged their vows.

About 150 guests, including Sir Tim Rice, attended the reception at which every table was named after a West End Theatre. The musical theme continued into the speeches when Hal, who has avoided interviews about his relationship with Kim, broke into a song written specially for the occasion, cryptically-titled 'Has Anyone Seen My Shoes?'. The couple then led the dancing to Frank Sinatra's 'I've got you under my skin'.

After a short honeymoon in the UK, Kim will be back on stage in Tommy on Monday leaving Hal, who is still nursing a knee injury, at home. Proud father Bob Fowler said after the reception: 'The day was perfection, just faultless. The family happiness on both sides was for me the hallmark of the day.' 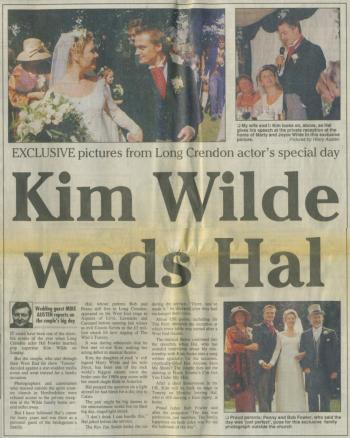