Kim's wild ways are over

As she gazed longingly at the beautiful wedding gown in the shop window on the way to rehearsals, Kim Wilde, at 35, found herself wondering whether the day might ever arrive when she would wear such an exquisite dress. But it has - for Kim is to take a break from her role as Tommy's mother in Pete Townshend's hit musical to marry her co-star Hal Fowler, 28, tomorrow at her local church in Codicote, Hertfordshire.

It will be a family affair and Kim's bridesmaids will be her sister Roxanne, 17, her niece Scarlet, eight; and Jasmine, five, the daughter of Hal's brother. For Kim, who has had a succession of disastrous relationships, it will be an extra specially happy day. Before meeting Hal, her love life was non-existent; none of her previous loves had lasted longer than three years; she was 35 - and questioning whether she would ever find long-lasting happiness with a man.

Then the unexpected happened. After a whirlwind romance with actor-musician and writer Hal - who plays Cousin Kevin in Tommy - hired a private plane and whisked Kim off to Calais for lunch, where he popped the question. And one of the first things Kim did was to march proudly into that Covent Garden bridal shop to order the "dream" wedding dress that had so taken her eye. "This is the happiest I've ever been because I feel it's so right", says Kim, excitedly, showing me her blue sapphire engagement ring. "There are no doubts or question marks. And I've always had doubts before about all kinds of things - not just about men, but about my life. I've never been so relaxed about everything. It's amazing how good love is for us. It's the best tonic in life."

Kim says when she took the role in Tommy, at the Shaftesbury Theatre in London's West End, the last thing on her mind was that she would fall in love. "I have had a few experiences with men which left me disillusioned, so I thought it was probably best to keep away from that troublesome area because it always ended in tears. I've been with men and thought I loved them very much, but now I realise I wasn't in love with any of them. I think I knew at the time - that's why they never lasted", she says. "I don't make promises lightly. I've been brought up to believe people's feelings and emotions are tremendously important. That's why I want our marriage to be in a church and to take a solemn oath."

When she met Hal at rehearsals, she found him the most interesting man she had come across in a long time. But she had decided to put her feelings on hold, as she wanted to concentrate on the play. "He became someone I looked forward to seeing every day. I thought he was charming. He didn't actually ask me out until a few days before the West End opening. I was hoping that he would ask me out, but I'm an old-fashioned girl and, as liberated and independent as I like to think I am, I wasn't going to ask him out."

Kim found it a refreshing change that Hal didn't appear to know anything about her career. He preferred classical music to pop. "I don't think he's ever been to a pop concert", she giggles. Befre finding her true love, Kim dated musician Calvin Hayes, the son of her record producer Mickie Most, for two years and the drummer in the group Johnny Hates Jazz. Then for a year she was with student Rupert Kenyon, the son of a millionaire businessman and 10 years her junior. She then surprised her friends by having a fling with DJ Chris Evans, but it only lasted three months."At the end of it I felt I had met a man that I wanted to know as a friend and not as the man in my life", she explains. She was never going to compromise in relationships if it wasn't right. "My dad always said to me, 'If you are 18 or 80 it's worth waiting for', and I believed him. I thought, 'Okay, if I have to wait until I'm 80, I'll wait'. "

It was a natural step for Kim to go into the pop business. Her father is Fifties rock 'n' roll star Marty Wilde and her mother Joyce Baker was a singer with the Vernon Girls. After her first hit, Kids In America, the then 20-year-old Kim, with her full lips and shapely figure, was labelled a sex kitten and the French were soon calling her Britains answer to Brigitte Bardot - a comparison which maes Kim shake with laughter. She sees the sexy, leather-clad image as a mask of her true self. And after the novelty of hit records and fame had worn off she became disillusioned and miserable. She was tired of making daily flights into European countries for TV shows and personal appearances.

She was in tears almost daily about the state of things and piled on weight through comfort eating when she returned to living in the country near her parents for some sanity. "I was just expecting more out of being famous", she says. "I thought: 'Well, if you don't get happiness through success, how the hell do you get it?'."

Although she has mixed with the cream of pop - even touring with Michael Jackson - she remains unaffected, a typical girl-next-door figure. She lives within walking distance of her parents' home, having converted a beautiful old barn for herself where she and Hal are now living.

"Right now I'm looking forward to sharing my life and I just want to have his kids", she says. "I wouldn't mind having three all at the same time and getting it over and done with." Although she will continue to record - next month she is releasing a dance version of the Evelyn Champagne King record Shame - she is prepared to cut down on her work when babies come along. "All the things that were such burning ambitions and forces within me have evaporated, because there is something much more important going on. I'm in love with someone. He comes first and everything else comes second. I've never ever felt that way about anyone. It's very liberating. I know that from now on it's all going to be great. I can't wait to spend my life happily with Hal." 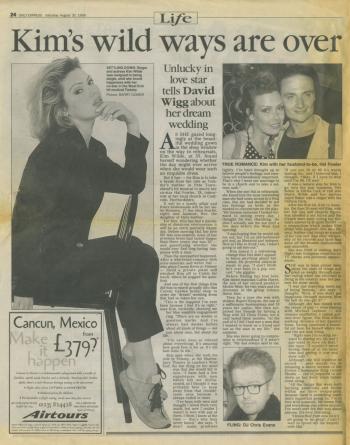