Laurent Voulzy will be happy. A few years ago, he deplored having passed nights without Kim Wilde. These days, he can see her every night in the theatre, where she plays the principal female role in 'Tommy' (next to Paul Keating), the famous rock opera written and composed by Pete Townsend - leader of The Who - in 1969, and carried to the screen by Ken Russell. A resurrection for the singer, dirtily ravaged following some failed romances.
"I have been chosen from many candidates during an audition. It's a surprise I didn't expect."
Star of the eighties, she has sold no less than seven million albums, and even twice as much singles ("You keep me hangin' on", "Kids in America", "Cambodia".)
Still unmarried and more wild than ever, she lives again on the artistic level. Because, not content with her stage debut, she is also releasing a new album inspired by soul. "At 35 years, it is necessary to stop lying to yourself and doing only what one really likes", she says. This motto fits her like a glove. 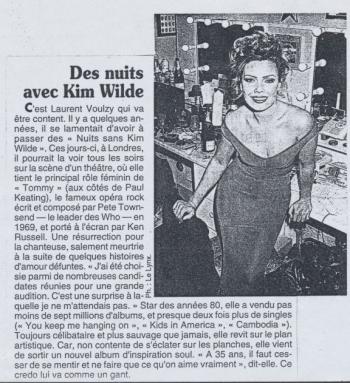