See me, feel me: Tommy is back in London

The elderly woman on the first row of the balcony is scared out of her wits. She's sitting on the edge of her seat when the musical begins, determined not to miss anything. That first guitar chord scares her. What a racket! She falls back in her chair, stiffened. Some two and a half hours later she rises enthusiastically for an ovation that lasts for minutes.

Tommy is back in London. In 1969 the rock opera by Pete Townsend had its premiere during a performance of The Who at Ronnie Scott's, a jazzclub in Soho that still exists. Then it was the hip and young generation of the capital that loved the story of the deaf dumb and blinde pinball wizard. In 1996 the rock opera-turned-musical is entertainment for a wider audience.
On the second evening of Tommy in the Shaftesbury Theatre is the hall filled with an audience that consists of all classes of the English population. There are fourtysomethings for whom Tommy will be youth sentiment. But the generations before and after them, too old and too young respectively to have taken part in the wild life of the sixties, are also well represented. 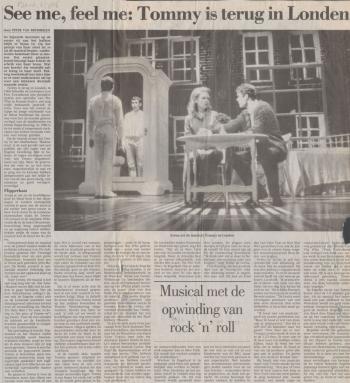