Kim Wilde's perfect pout and sensuous curves used to drive Radio 1 DJ Chris Evans crazy with passion. Now the singer is planning to put her old flame in a spin - by starting up as a rival DJ.

Kim's success in hit rock musical Tommy has given her the courage to take on new challenges and, as these sensational pictures show, she's never looked better. Talking about her radio plans for the first time, 35-year-old Kim reveals: 'Chris is one of the best DJs on air but it's time that us women started fighting back. I can't say too much about who I'll be working for yet but it will be a chance for me to chat, play music and have a laugh. That's what I admire about Chris's breakfast show - he takes chances but has fun. I'm not saying I'll be able to match his five times a week but I'm sure going to give him a run for his money!'

Kim's change of direction follows her success in the latest production of Pete Townshend's rock opera. Winning the role of Tommy's mum meant Kim could leave behind the boozing, binge eating and depression which have haunted her career. She says: 'Before Tommy came along I was feeling frustrated. I had a record out but needed an additional challenge. Tommy gave me that. As soon as I saw the script I knew I had to have the part. Now I love the show and have never been happier. It's tough doing eight shows a week but it's worth it. For the first time in my life I feel totally in control of my emotions. I used to be terrified of everything - failure, being ignored, sometimes even getting up was too much of an effort. I used to cope by drinking too much, eating too much and generally becoming a wreck. Now I realise that isn't the way to survive. The past five years have been a real turning point. I've grown in confidence and finally realised that worrying isn't going to get me anywhere. I'm ready to take on things I was scared to even think about before. I know how to be happy now and I'm making the most of it. I feel good about my life and about myself. I'm content.'

Kim won't even let men spoil her happiness. Her last relationship was with Chris Evans, who fell for her charms when she joined him as guest host on C4's Big Breakfast in 1994. They dated for just six weeks. Kim says: 'I'm a single woman and happy to be so. I have a great time and go out with wonderful, fun people and that's all I want right now. Chris was a lot of fun but splitting was best for both of us. It was very messy and upsetting and it's put me off talking about my boyfriends. It's all right now and we're good mates but it has taught me to be much more guarded.'

Throughout her troubles, Kim has remained close to her mum Joyce and her dad, Fifties pop star Marty Wilde. When her career nose-dived and she hit depression at 30, Kim fled her London flat to the peace of a converted barn near their home in Hertfordshire. But appearing in Tommy in the West End's Shaftesbury Theatre has meant returning to the capital in the week. Kim says: 'I'm loving it this time although I do tend to burn the candle at both ends. I'm on such a high after coming off stage that it's impossible to go home to bed with a cup of cocoa. I go out for dinner and then party until the early hours, either with the rest of the cast or with friends. Life's too good to miss. I've got a new single coming out in the next two months and I'm really excited about the radio job. Tommy has got me hooked on acting and I wouldn't even mind doing some telly work...'

Chris Evans, you have been warned. 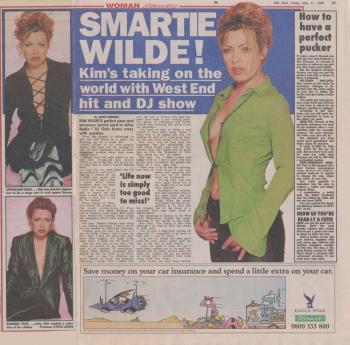