The kid is alright

Tommy Walker, aged four, 10 and some time in his late teens. How do you think he does it? Wat makes him so good? Maybe it's the universal truths behind Pete Townshend's aromatic original story of a boy robbed of his biological senses but delivered, through exploitation, excess and Uncle Ernie, into an astral plane of enlightenment. It could be the 27 year's practical road-testing of this definitive rock-opera by The Who, the LSO, Ken Russell, Bette Midler, Ringo Starr, Billy Idol and countless others, as if to prove, like so many immovable West End shows, that, like Thomas Walker himself, it's ageless.

Perhaps, in the case of the latest run at London's Shaftesbury Theatre (booking till September already), it's the 5 million worth staging, by which a relatively pokey space is transformed, by doors on strings and tavbles on wheels and crack-filling Gilbert & George-style panelled backdrops, into a 22 scene-change odyssey. When US-debuted, as rock rather than opera, in 1969 at New York's Filmore East (a fire at adjacent Lion Groceries stole the show), an inspired Albert Goldman wrote that Tommy "prefigures the final confronttaion when blood will flow in the streets and the seats of power will be dynamited."

Maybe. All had gone off without hitch at the London press launch at Ronnie Scott's. Likewise, Lou Reizner's concert version in 1972 with the London Symphony Orchestra and Peter Sellers, and an early London stage version in 1979. Even the follyish 1989 Who reunion renditions at Radio City and the Universal Amphitheatre for charity were remakable mainly for their lack of blood and dynamite.

In truth, Tommy is a cosy institution: a guys'n'dolls chorus line extravaganza that entirely suits a Shaftesbury Avenue residency, as good as stripped of all the druggy, bean-soaked sleaze of Ken Russell's 1975 movie (although the Uncle Ernie episode survives, even in these kiddy-fiddlage-sensitive times). If the personality pieces (Acid Queen, Cousin Kevin) lack punch, and the show's star - shelf-stacker made good Paul Keating - enunciates too clearly to recall Roger Daltrey's rock squeal, then the overall vitality of Tommy '96 carries it through to an ovation-tempting Listing To You finale. ("Some folk are easy to please", reasoned Clive Hirschhorn of The Sunday Express.)

A tired and promotional Townshend, asked to hurry his summary of the plot on Chris Evans's TFI Friday show, plumped for "and it just gets better and better". In fact, Act Two's turned-up-collar rock god phase is its least convincing - a cyber-tastic video wall especially out of sync for a scene set, still bafflingly, in the '60s. Keating aboard a showpiece bucking bronco pinball machine is, nonetheless, a truly gripping spectacle, and racks up some much-needde goodwill for the undermanned squib that is the plot's conclusion: Tommy's followers - well, eight of them - come to his house, he kicks them out, and gets to know his family. Very Walt Disney.

The "proper" critics exposed themselves as men old enough to, well, be in The Who, with much turn-it-down intolerance. "Like a series of garish rock videos" shorted John Peter in The Sunday Times. "Middle aged rock elbowing its way into the West End", sniffed The Independent On Sunday's Robert Butler, rather richly. Such griping will, however, fall on deaf punter ears for months to come. Last word from The Financial Times ,who broke rank and cried "definitive", and people's pal The Sun: "ROCK ON TOMMY!" Anyone for an Iron Man revival? 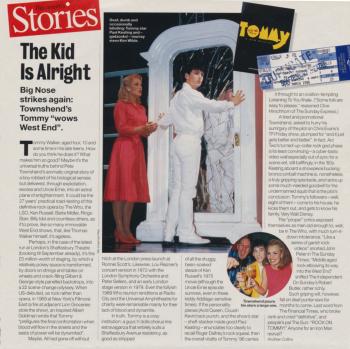