The visual acceleration of Tommy is scary. In its dizzy two-and-a-half hours, encapsulating a 25-year time warp from 1941, the audience is transported to such disparate locations as POW camps, courtrooms, suburban interiors, amusement arcades, clinics, doctors' surgeries and rock gigs. Apart from that, there's exposure to the social frustrations and expectations of post-war reconstruction and optimism.

Most importantly of all, one is drawn into 'Tommy's world', a bizarre, trauma-ridden labyrinth of thoughts, ideas and experiences from which the normal world is completely alienated. Tommy goes into deaf, dumb and blind shock after seeing his real father, missing-presumed-dead in World War II, return at the end of the war and shoot his mother's lover.

The child is systematically hauled between various medical specialists, faith-healers and religious nutters by his guilt-obsessed parents on a mission to return him to 'normal', come hell or high water. In the meantime, he is sexually abused by his uncle, beaten up and tortured by his cousin, and ridiculed by a society that marginalises those who are different. The four walls of Tommy's distorted dream-like world are his only solace. Eventually he responds to a pinball machine - and so the helpless, unwanted, deaf, dumb and blind kid begins his ascendancy to empowerment, triumph and adoration as the Pinball Wizard... only to discover that the vestiges of stardom present their own set of stifling constrictions.

This fast-moving story might touch on the implausible, but it's still a highly symbolic psychological minefield. Apart from the music sounding somewhat dated, the absence of social workers in the plot is the real clue that it is a '60s rather than a '90s construction. However, the stage production of Tommy is very much a product of contemporary technology and methods.

Scenery and lighting are crucial in propelling the action through its furious pace. Hardly a minute passes without a set piece rolling on or off stage or flying in or out, all of which are achieved with an authentic aesthetic fluidity.

Associate designer David Gallo emphasises that backstage activity is extremely frenetic throughout the show, but that even in the small confines of the Shaftesbury, they now have the well-oiled mechanic needed to make Tommy work on a practical level down to a fine art. (He jokes that this operation was so slick and polished during the Broadway run that he'd contemplated installing a perspex loading bay door and selling tickets to watch the backstage spectacle.)

Deck-based scenery is moved via six tracks in the stage. Many of the set pieces also contain lights, and several of them spin - spinning being a recurring image throughout the show. Most of the floor and flying scenery is moved by an Edge and Bratton computer-controlled system that, according to Gallo, is "fast, accurate, flexible and easy to programme."

There are certain parts of the show where the visual bombardment is so complicated and overwhelming that only computer control could ensure the accuracy of the scripted scenery moves. He cites the 'Heathfield Scramble' scene as one of those moments - when Tommy 'loses it' and his whole world tilts into a confused mesh of sensory distortion.

But Gallo (like others on the core design, lighting and audio team who have re-created the show around the world) is cautious about letting technology take too much of the credit for staging Tommy. While he is the first to acknowledge that realising the show's imaginative complexity needs high technology, he views it very much as a tool that shouldn't detract from the importance of the ideas.

This issue is also taken up by Associate Lighting Designer David Grill, who stresses: "People tend to walk into this show, see all the computers, gizmos and gadgets and just talk about that aspect. We have achieved a better production here through the use of technology, but it is the show that drives the technology, completely and at all times."

Colour psychology plays an important role in the chromatic narrative. And the show's very nature - essentially a rock 'n' roll production in a theatre environment - sweeps away some of the more conventional benchmarks for lighting.

When Tommy is at his most traumatised, reds and yellows abound. The clinical world of one specialist is embodied in dark blue and steel blue; the life and vitality of an amusement arcade inhabited by Teddy Boys and their gals vibrate in bold, brassy primaries; while the Acid Queen's mysterious and forebodijng weirdness is personified in purple and lavender.

The show is operated from an ETC Obsession, which spits out MIDI information via Richard Bleasdale's SAM (Serial and MIDI) software that triggers the Artisan console.

The lighting instruments most fundamental to the show are Source Four's, Source Four PARs, ARRI 2Ks and 17 Vari*Lite VL2Cs. Grill enthuses that the Vari*Lites can do the work of 300-odd specials - and pays tribute to the efficiency of the new Source Four unit, which has enabled the lighting department to trim the 400-odd focusing units used on the Broadway production down to the 200 specified in London.

Projection is also pivotal to the show's visual impact, providing a key element in giving the audience a sense of place, as well as clues about what is going on inside Tommy's turbulent mind. The projections were created by Wendall Harrington, who says she found the experience of trying to get inside the head of "someone who is disturbed rather interesting". Many of the images were created on computer, with Harrington exploring how much of an element of terror she could produce "without frightening people too much!"

Creative Technology's equipment inventory on the show includes 54 Kodak Ektapro 300 watt slide projectors, back-projecting on to the 18 screens which form the stage backdrop and 50 Barco video monitors either side of stage and on one of the cross stage trusses. These are fed at various points from five black and white video cameras on-stage and three laser disk players.

Front of house, two more Ektapros beam images onto one of the flying windows; plus there are three hybrid Pani projectors with ETC image scrollers, the latter controlled via a PIGI system. A Dataton Trax system runs the slides and triggers the PIGI computer, as well as the computer controlling the video projection. Thus operator Paul Vershbow can operate all three media with one hit of the spacebar.

Talking to David Gallo, David Grill and Associate Sound Designer Jon Weston confirms how deeply Tommy has become an important part of their lives over the last three years. Although all three are also engage on other projects, Tommy retains a special place in their affections. They talk about the positive, collaborative nature of the show and the ease and fluidity of inter-departmental dialogue that makes each successive staging easier than the last, the support they have enjoyed from Pete Townshend - and the energy, power and endurance of the show.

The sound of Tommy

The audio system was designed for London by John Weston and supplied by Autograph Sales. Sound operator David Ogilvy says the audio production follows the company's previous experiences in New York and Germany. "We brought in the Cadac disk from Germany and could almost have run the show from that, although in fact we've made a lot of changes since."

The sound has to strike a balance between the dynamic necessary to convey the power of Townshend's music and vocal clarity - not to mention the sensibilities of the SHaftesbury's neighbours.

One of the Cadac J-Type's frame is fitted with 30 automated faders for vocal mics and all sound effects - off a Mini Disk player via a Yamaha DMP-9 - are controlled by the Cadac's PRMs, allowing the operator to insert time cross-fades and route them to anywhere on the system, 26 Sennheiser SK50 radios, with MK 102 mics, are used in every show, while the band comprises drums, three keyboards, bass, french horns and two guitarists.

The PA uses Meyer UPA-1s (pros arch); EAW JF-80 under-balconies and front fills; Meyer sub bass; Renkus-Heinz foldback speakers on stage and Meyer UPMs for surround sound. Most amplification is Crest 7001s, with Macrotechs for the surround system. The acoustically dry room is tackled with an armoury of processing, says Ogilvy: "In the racks are lots of Varicurves, lots of Valvotronics Gain Ryder compressors, a Lexicon 300, some SPX990s, Klark Teknik equalisers and BSS TCS804 delay units."

Tommy, the album, the world's first so-called 'rock opera' became a huge hit for The Who back in 1969, who last performed it live at the New York Grand Metropolitan Opera House (the venue's first ever "pop" show) a year later.

In 1975, film director Ken Russell turned Pete Townshend's funny-weird-melancholic piece into a lurid psychodrama and between then and the late '80s a sprinkling of Tommys culminated in 1993's opening of Des McAnuff's Broadway production at the St James Theatre in New York. A revitalised revision of the original with new ideas and a high-technology production, it remains one of the most artistically and commercially successful shows to open there in years.

It was McAnuff, artistic director of the renowned La Jolla Playhouse in California, who approached Townshend with the idea of recreating Tommy for the stage. And when the show opened on Broadway, the New York Times' theatre critic Frank Rich (the man who can allegedly make or break a show with one touch of his word processor) opined: "Tommy is at long last the authentic rock musical that has eluded Broadway for two generations - an entertainment juggernaut that lifts the audience right out of its seats." A reported $6 million was spent on bringing Tommy back to life - and it shows, in the sheer quality and subtlety of the ideas and their execution. An array of automated and conventional lighting, multi-projector visual effects, imaginative staging and props convey the atmosphere and storyline. Finally, to create the accompanying sonic drama, the producers brought in sound designer Steve Canyon Kennedy, a Broadway veteran whose credits include Evita, Cats and Phantom of the Opera. 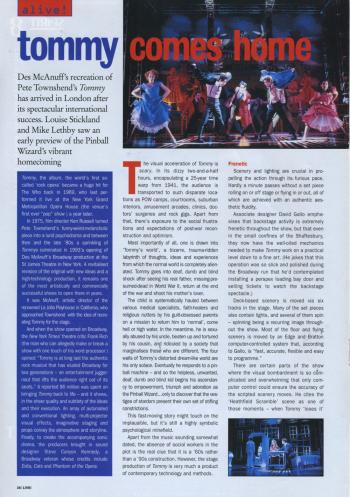 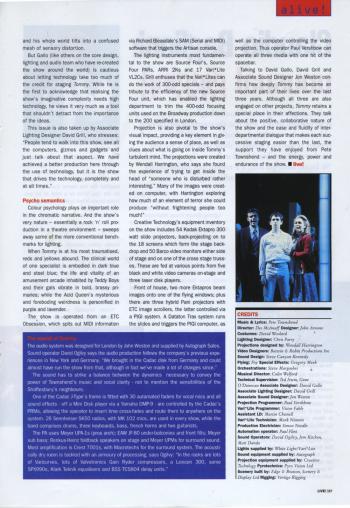