The Shaftesbury Theatre in London was turned upside down last night during the English premiere of the rock musical Tommy. In 1969 - over a quarter of a century ago - Pete Townsend from The Who wrote the songs and the story of Tommy for a cd that conquered the world. The songs became true classics that everyone knows, such as 'Pinball wizard', and got a standing ovation. Just like 'See me, feel me'. This last song title says it all about this musical, that moves you to the bone whether you like rock and pop music or not. It takes you inside the emotional world of Tommy. The child that becomes deaf and blind because of a childhood trauma - he is witness to the murder of his mother's lover by his father - and becomes isolated from the world. You can't help but sympathise with little Tommy. Played at first by a six year old and then by a ten year old until Tommy is freed from the mirror in which he has seen the murder, when it's broken into pieces.

This is one of the most moving and touching scenes I've ever seen in a theatre. The moment of Tommy's liberation. Pete Townsend from The Who has written about his own World War II trauma in Tommy. The bombardments, the threats, the fear. It passes you by in projections but evokes all the feelings that everyone who has been witness to this time still remembers.
Tommy proves that pop music can be emotional. Tommy is very of this time, 26 years after its first release. In fact it's a symbol for the often confusing times we live in. Tommy is co-produced by Joop van den Ende, who's had his first Broadway experiences with 'Cyrano' and 'Viktor, Viktoria' with Julie Andrews. Now he makes his debut on the West End. A good debut, because at the premiere there was a standing ovation for minutes, which is quite unusual in England.

Tommy is home, they said. It refers to the uniquely English songs by The Who but also to the fact that Tommy was on Broadway three years ago. It won five Tony Awards there. But however good this Broadway production was, it missed the emotion and warmth of this English version. The musical stars on Broadway were good, but they missed the European soul that is present here. In this Tommy the heart of the sixties is beating, Pet Townsend's heart, for whom it's a look back on his life.
Tommy is home and it's remarkable that it happens because of Dutch involvement. Joop van den Ende said last night: "After Cyrano my executive producer Robin de Levita and I saw Tommy in New York. I thought it was something new, something refreshing because of the use of projections and other techniques. A special experience in theatre. We tried to get the rights for Europe, which was kind of difficult. Shortly thereafter I was on holiday on Barbados. My wife Janine got to talk with an American woman. It happened to be the wife of Ed Strong, the American producer of Tommy on Broadway! We got to know one another and so I made him enthusiastic for an English version of Tommy. And he gave me the rights."
Endemol Entertainment produces this musical in cooperation with Pola Jones, an English theatre production company. Van den Ende: "We've got the plan to release Tommy in other countries now and after this success I think it's certainly interesting for Holland as well."
The discovery of Tommy is the 19 year old Paul Keating, who got the best critiques for a debutant I've ever seen. Because it's his first lead role. But Robin de Levita told me: "We did auditions with 1200 boys. Finally we chose Paul. We got into trouble because of that. They really wanted to have a wellknown star. But Paul was working in a supermarket a week before. But he was simply the best."

And now he's a superstar on the West End. For Paul Keating the evening couldn't be better. He looked at the standing ovation at the end of the performance in wonder, just like Kim Wilde who plays the role of his mum. A turning point in the life of this popstar, who showed herself a true musical star in this role.

Over 7,5 million guilders were spent on this production before the curtain was raised last night. Van den Ende: "The show will have to play for 41 weeks until we break even." That's the big gamble of such a production, in which other Dutch people have invested.

But tonight everyone agreed that Tommy would be a success. Leon Ramakers from Mojo, Holland's pop expert, was dancing while he was sitting on his chair during the performance. He said: "This is fantastic. This is real rock and roll theatre. It's the best rock band I've ever heard in a theatre. It moves you, it grabs you. It was a very exciting experience, like being in a stadium during a pop concert and totally losing it.It proved that what's really good stays really good."

The premiere was visited by lots of big stars and of course by The Who's singer Pete Townshend himself who wrote the songs and has seen a dream come true with this musical version. Pete said last night: "I am enormously happy with the reaction fro mthe audience tonight. Paul and Kim and the children were fantastic and the show has got more substance than the version in America." 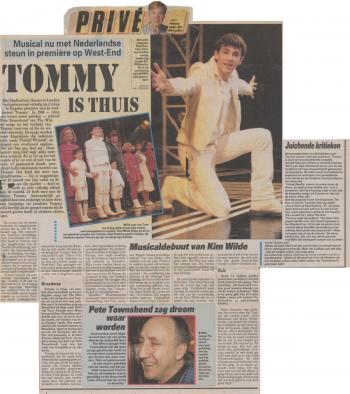