Tommy is triumphant in a show of passion

Amazing how potent, how poignant thls early rock opera, from the hippier days of the Sixties, still sounds to today's more cynical hearts and minds. Pete Townshend's 26-year-old Tommy returned in triumph to London last night as if to show that rock 'n' roll need not be just transient mood-muslc.
Townshend's score, performed by a nine-strong orchestra, reminds you that rock can memorably encompass high emotion. The c1imactic sequence, when a huge mirror shatters and Tommy is freed from the controlling ghosts of the past, is as thrilling as anything I have seen on the musical stage. Des McAnuff's atmospheric, quick-silver production, with superlative back-projected photographic montages by Wendal1 K Barrington, excites and compels. The rock opera's characters are thin to the point of inscrutability, with most of the main performances suffering from first-degree blandness, and Wayne Cilento's choreography is listless. But, oh how vividly Townshend evokes Tommy's misery. Only those with ears deaf to the sounds of the past will know nothing of Townshend's wretched hero who in infancy sees his Second World War airman father - Alistair Robins - murder the lover of his wife (Kim Wilde), after catching the guilty pair together. Tommy fulfills the parental instruction to say nothing with a terrible, ironic vengeance, when the boy loses the power of speech.
All he has left to him are visions - blurred, distorted figures - while voices come at him as a meaningless babble of noise.
This may sound the stuff of operatic melodrama - a sort of modernised Bellini in full shriek and hard rock. When the wordless, pre-adolescent Tommy has been both sexually molested by his alcoholic Uncle Ernie (Ian Bartholomew) and physically abused by his cousin Kevin you may feel his awful, mute suffering is unnecessarily protracted. But it's a sense of lurid nightmare and ultimate relief from it that Townshend wants to convey in words and music. And how he does.
The dramatic, shrieking chords of alarm when the lovers are discovered give way to the image of the transfixed little boy gazing into the mirror, as though it could offer him escape. But then his adolescent self, in the shape of the slight, vulnerable-looking Paul Keatlng (who plays the teenage Tommy) appears above him. The rock-opera acquires its pathos from the fact that this profoundly Isolated figure is haunted by visions of his younger and older selves.
The famous, yearning song 'See Me, Feel Me', which Keatlng powerfully sings, hints at the recovery Tommy will make - after the psychiatric clinic and Nicola Hughes's acid queen, a dull clone of Tina Turner, have vainly tried to transform him.

The scenes of Tommy's triumph as the wizard of the pinball machines are as nothing compared to the great moment of release when he is rescued from his prison of silence. Townshend's eloquent music, which has compellingly maintained an atmosphere of shimmering anxiety and tension, breaks out into a fanfare of exaltation. Keatlng is better at suffering than enjoying his status as a modern hero, and Kim Wilde as his mother, who seems to inhabit a feeling-free zone, scarcely helps.
And it's true that the f1ns1 scenes of Tommy's glory, ranged before banks of video cameras and enthusing crowds, are anti-climactic. But Townshend's rock score resounds with such passion and feeling that it bInds an alluring spell of its own.

Deaf, dumb and blind kid is a sure shot

Pete Townshend's rock musical Tommy burst on to tbe West End stage last night amid confident predictions that it will be a hit. Newcomer Paul Keat1ng, tbe 19-year-old plucked from a part-time job at Tesco's to take on the title role at tbe Shaftesbury Theatre, left tbe original Tommy, Roger Daltrey, impressed.
"He was great, " said Daltrey. "It's not an easy part to play being deaf, dumb and bl1nd. You have to have an inner strengtb and he does have that. It's tbe first time I have seen it all make sense and it's a lot to do with him."
An admiring Sir Bob Geldof dubbed tbe £2.5 m1ll1on show's visual and aural impact "technically amaz1ng" while Sir Tim Rice was confident tbe show would be "a big hit."
Former rock star Marty Wllde - who had to declare an interest with daughter Kim making her West End debut as Tommy's mother - thought so too: "I just wish I had shares in it."
It will be extremely successful and, 26 years after he first created Tommy, it sounded sweet to Townshend. "I am very happy with the response tonight," he said. "Paul, Kim and the kids were great and the show seems to be spiritually slightly more rooted here than in America. It is the sixth one we have done and we are getting good at it."
Later, at a £50,000 party In the Astoria for 1,500 people, other fans included artist Peter Blake, actress Jemma Redgrave and composer Lionel Bart. First night nerves, however, played their traditional role for the principals. "I was a bit overwhelmed," admitted KIm, while Paul added: "It could have gone better." 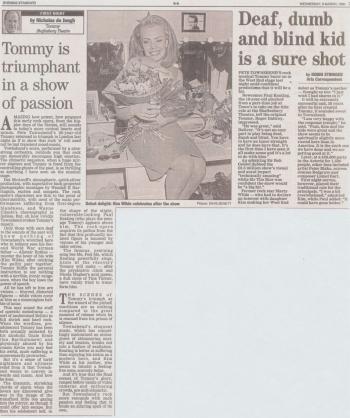