After the successful premiere of the musical Tommy in London there was a swinging party at night in the discotheque Astoria, where The Who used to perform a lot and which hasn't broken down despite that. It was a nocturnal feast where people were swinging until the early hours and the stars were shining.

Also the stars from the Netherlands. Because Tommy is produced in part by ENDEMOL, Joop van den Ende had invited some 130 guests from the Netherlands to attend the premiere. Among them were many of his stars like Andre van Duin, Henny Huisman, Ron Brandsteder, Jan Rietman, Willem Nijholt, who will play the leading role in Miss Saigon, and Simone Kleinsma and her husband Guus Verstraete with him she was dancing on the loud music that lasted all night.

Highlight of the night was the performance by rock legend Pete Townshend, the man whose classic popsongs are the basis of the touching musical Tommy, which is becoming the hit of London now.

Pete Townshend plays with his own band and that was very special. "He's a real rock legend", said Rene Froger. "I've been admiring that man for years. He's my idol."

Rene's biggest wish was to meet him! We organised that for him. Pete Townshend turned out to be a shy man, who wasn't yet sharing the euphoria about his musical. "I have to wait until the reviews", he said. But when the newspapers were out a few hours later and they were jubilant, he was really swinging.

Pete Townshend has been involved in the production and chose Paul Keating to play the leading role. "A great talent", said Pete, who posed with our Dutch stars for whom the night was memorable. Henny Huisman: "I used to be so big on The Who that I - having just met my wife for the first time - tried to impress her by getting the same curls as Roger Daltrey (52), the singer from The Who. Roger was also present at this party, but it was remarkable that he didn't speak with Pete Townshend. Too much will have happened between them.

Impresario Jacques Senf knows a little about that. He was the first to get The Who to our country. "I remember that one of the band members, the late Keith Moon, threw his entire drum kit from the third floor of the Hotel Wilhelmina in Delft".

The Who was a band that used a lot of drugs in the Sixties and did everything that God forbade. Leon Ramakers from Mojo: "Sometimes they were so stoned, that Roger and Peter played two different songs beside one another and then left the stage because they were out of it. I saw it all happen."
Hotel rooms weren't safe for them, especially for Keith Moon, who started to use heroine, which eventually killed him.
Pete Townshend has had a life and it's a miracle he's still around!

Britt Ekland was also at the party; she used to be married to Peter Sellers. She was obviously charmed by Rene Froger, who has a new image. He didn't just lose 11 kilograms, he doesn't shave every day anymore which makes him look more macho. His hair is also shorter. It's the new face of the Netherlands' most popular singer, who is very happy with his baby, born to him and Natasja a few months ago. Natasja said: "A child changes your life. I've never known it's so great being a mother. Rene also enjoys every minute."

"But now we're out together for once. It's important within a relationship. Even if you have only recently gotten a baby, you need to have some time for yourselves. When I said to Rene last week: 'Our baby laughs so sweetly', he said: 'Me too'. Natasja smiles. It was a signal and she looked at Rene, who is busy preparing his new CD as well as his tour.

Andre van Duin was very relaxed on this party. He is happy that he doesn't have to keep his love for his young boyfriend Eelco a secret anymore. Together they enjoy a few days in London. Andre: "Tommy made a big impression on me. It was moving and yet exciting."

Remarkable was the attendacne of actress Petra Laseur together with her sister Merel Laseur. Merel is the mother of producer Robin De Levita, who was a little high from all the excitement and tensions of such a premiere, but posed proudly with the discovery of this show, 19-year-old Paul Keating, who after he played as a child in Les Miserables in London eight years ago never managed to find a job in showbusiness again and had started to work in a supermarket until being discovered for the main role in Tommy.

It was his night, but also Kim Wilde's night, who has made a change in her sexy career by playing her first mother role in Tommy. And thus it became, to use her surname loosely, a wilde night, during which Joop van den Ende and his wife Janine were swinging as well. For Joop the tension was gone and the next day he flew to Barbados for a short holiday, in order to rest after all the excitement of Tommy. 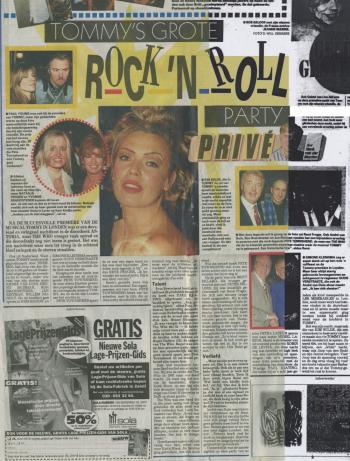