Why can't I find a man to fall in love with me?

Kim Wilde, the one-time pouting poppet of easy listening, used to complain she was followed everywhere by men. But that was before her emotional crisis, her weight problem and her career collapse. She talks to Louise France.

Then her mother gave birth to a daughter who, at the insistence of the teenage Kim, was called Roxanne after a record by The Police. A year later Marty Junior was born. And then, at the age of 20, Kim had her first hit. As a child she had told girls in the playground that she would be a famous singer when she grew up. But the single was practically an accident. She was just doing backing vocals on Kids In America when everyone realised she'd be better off being lead singer. Her mother became her agent, her brother her song-writer and the Wilde family bandwagon started up again.
On countless occasions she talks about how close she is to her family but you wonder what it must be like to be quite so on top of one another. She'll have none of it. "There have been times when I thought, "Oh God I wish they were just ordinary; that they didn't have anything to do with my life". There have been rough times but never any major fall-outs.'
Kim Wilde talks like a born-again evangelist when she describes her life now. She uses words like 'Sorted' and 'positive' and she doesn't have any faults which she's not 'working on'. In March she'll be making her stage musical debut in Pete Townsend's award-winning revival of Tommy at the Shaftesbury Theatre in London. She says she gets up every day and feels an adventure is about to begin.
These days she talks so much about her new, positive outlook on life, that it sounds rather unreal. Happiness, it seems, is being able to take time off to go bungee jumping or backpacking around Thailand. She says things like 'I like myself, I'm content with myself, I accept myself' - all in one sentence.
But when you ask her about having children she admits to a deep longing which surprises you after all the cheerleader talk. She says she'd be 'devastated' if she didn't have any kids. After all, she's 35 and there's no husband on the horizon.
Today she's in the middle of a recording of the tacky game show Talking Telephone Numers in a television studio in Wembley. You watch her giving her teeth a quick lick in case there's any stray lipstick on them and adjusting the black bra underneath the velvet jacket. Next week she'll be launching her new record in a shopping centre in Sheffield. It's not your idea of glamourous pop stardom. It's probably not hers either. But as her assistant says, 'Kim's a professional' and she'll get on with it.
You can't help but think - someone, please, pass Kim Smith the gardening gloves. 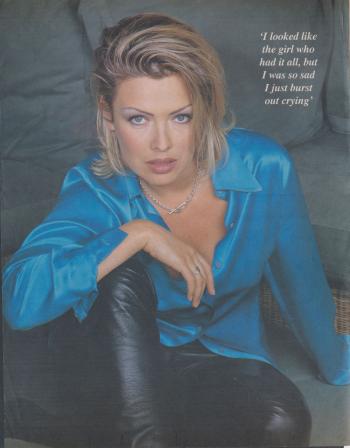 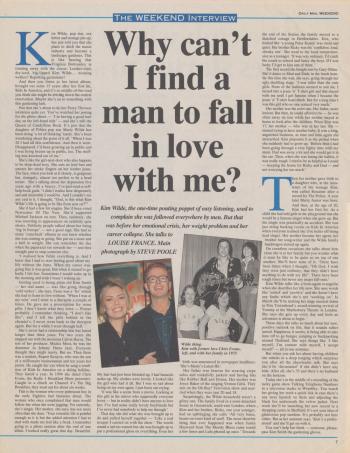