Lock up your sons! Stunning singer Kim Wilde is back in the charts, looking slimmer and sexier than ever. As our sensational shots show, the original Kid in America is definitely all grown up - but she admits she likes her men young!
"I've had a couple of boyfriends who were about 10 years younger than me and they were fantastic", says 35-year-old Kim. "I just picked up on their energy big time".
But she hasn't always gone for toyboys. Her name has been linked romantically with Calvin Hayes of Johnny Hates Jazz, Simply Red's Mick Hucknall and car dealer Paul Holmes.

Her most famous fling was with Radio 1 DJ Chris Evans. "We had a very strong connection", she says. "I was always a big fan and I still am. He's very sweet. There were lots of reasons why it didn't work out, but I never regretted doing it. Meeting Chris was really important for me. In him, I saw someone who was never afraid of facing a new challenge. Chris is willing to not play safe and I admire that."
At the moment, Kim is happy to admit there is no one special in her life. "May I just haven't met the right person yet, but I don't have time to explain to a boyfriend why I won't be home at night", she says. But Kim wasn't always so laid back about being single. In the Eighties, she became preoccupied with bot her career - it's been going for 14 years and she's sold seven million albums - AND her love life. "I kept wondering why my boyfriends didn't work out", she says. "But I was waiting for Mr Right to come along and solve my life". Then five years ago, Kim split up with a lover - and it affected her badly. She piled on the weight and hit the bottle. "I wasn't expecting the relationship to end and I felt like I'd gone down a deep hole", she says.

"I'd perform in front of 100,000 people, but I wasn't happy with myself. I was even tempted to try therapy, but I wanted to sort out my problems. It was very scary, but it was the making of me in the end."
Kim decided to leave her luxury home in London's St John's Wood and move back to Hertfordshire to be near her family. "Me and my mum talk about everything", says Kim. "She is a great friend as well as a mother. I also missed seeing my younger sister growing up and talking to my brother."
Now Kim lives down the road from them all and feels much happier. She's got a new album out, she's about to star in the £20 million West End musical Tommy - playing the deaf, dumb and blind kid's mum - and her new single, This I swear, is out on Monday. She's on the up - and looks it too.
"At one time I'd put on a stone-and-a-half, but I got rid of it in the gym. I don't eat fatty foods any more and I don't smoke. Exercise is very good for getting rid of tension and strees."
Kim is proud of her new figure, but says: "I'm not a buge fan of my body. I haven't got the best legs in the world, but they do a lot of walking."
She's pretty easy-going about her fellas too - they don't need to worry about how they look. "Their bodies are totally irrelevant." she says. "Hearts mean more and more to me as I get older." 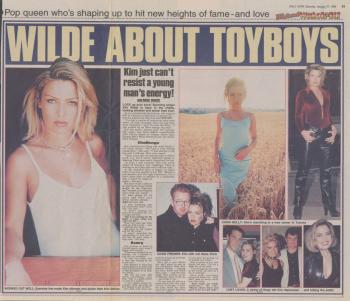