She may literally have been 'Born to be Wilde', but since playing 'Mrs Walker' in the hit musical Tommy, Kim Wilde has taken a fresh look at herself and is having the time of her life! John Finn talks to the former sex goddess turned actress.

A stunning sensation! That's what I think of Tommy and Kim Wilde's not bad either! 'I'm having the time of my life', she says. So are the audiences. The show is a non-stop rollercoaster of excitement, dazzling visuals, powerful music and wonderful performances. I never remember the album and film being so good. The truth is it's probably taken until now to realise the true potential of Pete Townshend's vision. Tommy justifiably claims to be the ultimate sensory theatrical experience.

Kim Wilde's part in all this is as the deaf, dumb and blind kid's mother. She is the picture of devotion and captures the heartache of what she has produced in Tommy. Eventually this frustration turns to anger and it is this that thrusts the youth out of his spell and into the real world of sight and sound. Now the freak becomes a hero with millions hanging off his every utterance, and hey presto! We're in business! Eventually, Tommy calls a halt to the merry-go-round, goes home and tells everybody to stop looking for a hero and to trust themselves more.

A lot of this is personal stuff for Pete Townshend. 'It does have it's roots in Pete's own life and I think Tommy became a sort of therapy for him'. Kim Wilde didn't have to look too far to identify with the story herself. After ten years of making music, selling millions of albums, touring all over the world, being photographed and adored as a sex goddess, she too came down to earth with a bump, had her own personal crisis and was forced to reassess her direction in life. Finding peace, she was ready for the challenge that came in the guise of Tommy. 'I found it very daunting at first, not having done any acting, but I soon settled into rehearsals and the director, Des McAnuff, made me feel good about what I was doing.'

Pete Townshend was also in on rehearsals and was spooked out by Kim's choice of name for Tommy's mother. 'Alistair, who plays my husband, and myself were getting a bit fed up calling ourselves Mr & Mrs Walker so we gave ourselves first names too. He called himself Frank and I called myself Betty. The name of Pete's own mum.'

I asked her if she had any off-stage motherly advice for Paul Keating who plays Tommy and is just being sucked into the fame game. 'Most people spend their whole lives running around with bad luggage and never take the time to come home and sort things out. Play as hard as you work, is the best advice I could give to anybody. I didn't for a long time, until suddenly I hit this emotional brick wall. I felt dissatisfied with fame, with life, with everything.' She had to leave London and retreat to home territory in Hertfordshire and begin the lonely process of finding out who she was and what she wanted. For years she had been throwing herself into work to avoid herself. 'I had everything - my health, a lovely family, a lovely home, money, a career, and yet I was disgusted with myself and at the point of despair.'

She indulged herself with booze and food, but luckily managed to avoid the lure of drugs. 'My family always brought me up to see drugs as boring and I think that stayed with me. For me boring is worse than bad. Boring is the worst it can get!'

Her family helped her through her dark moments. She began exercising and being sensible with booze and food. 'There were times when I was looking down a dark hole and couldn't see the light and thought I would never come out of it. That was the worst. But I did come out of it, and it doesn't worry me anymore because I understand it, and even if I did go back into it I would know there was a way out. I learnt so much and I could go on, but the best thing is I came out of it.'

She did try therapy at one point but found it didn't work for her. She let things take their natural course, read some books, and healed herself. This led to a spiritual awakening which she feels is now ever-present in her life. She trusts it now and listens to it because it has got her this far. 'It resides in me permanently now instead of just coming to visit like it used to. I can't label it but I have a sense of God in things and people and me. It also makes me want to get married in a church, and I've never really had a strong feeling about that, but now I do.'

I asked her if she minded all the press attention on her love life and the way she was always portrayed as the woman looking for Mr Right. She said she can't help being honest and open which has probably been an encouragement over the years, but she's now determined to be more private. 'We won't be a celebrity couple like Gazza and Shazza, or Paula and Bob. We won't be turning up at functions.'

She says she's feeling great at the moment because she's never experienced this kind of stability in her life - a steady job, a place she can call home, and a man she will soon be calling husband. 'I wanted my sanity back', she says. 'There are too many casualties in this business who just didn't know when or how to stop. I was determined not to be another one. I think it's a mistake to keep running around in circles doing the same old thing. If you're wise you leave it before it leaves you. Otherwise you're going to miss out on life.'

She says she will never stop singing but the form may change. She can't say how at this stage. It might be more musicals or she might even end up doing a stint down at the local! She's conscious that she's in a lucky position of being able to make choices. She doesn't have to do it for the money. 'I'm aware of my good fortune and I'd be a fool not to take advantage of it. I'm not the same girl I was when I started my pop career. I have a quiet confidence now which I didn't have then. ' This new confidence coincides with her vision of the future. Family will be central to this vision. She wants to be very involved with her kids and do the job well. Work will be considered with this in mind. 'I won't give everything up, but I will tailor my life more to their needs'. She obviously feels she's fulfilled a lot of ambitions in the pop world, having recorded, performed, written songs, made videos, modelled. She's toured with Michael Jackson and David Bowie.

She wants to continue writing but not just songs. Hal Fowler, her fiancee, is a writer of short stories and she's been having a go herself. Hal has just left the show. He was playing Tommy's cousin Kevin. Unfortunately I missed his last performance, but Kim was raving about how brilliant he was. The show was what brought them together. She says she was gardening, which began with a project at her country home. This has now developed into a more professional concern and will definitely feature in her future business activities. Childhood had its bleak patches with dad - rock 'n' roll star Marty Wilde - away working a lot of the time. Her mother gave up her career to have the kids. The solution to her parents spending more time together was boarding school for Kim which she hated. She was much happier when the family moved to Hertfordshire. The thing she grew up knowing for certain was that her mother and father loved each other which gave her great strength. 'It gave me something to strive for and believe in.' She believes love comes only once in a lifetime and it came to her as a reward for learning to love herself and learning to live with herself. 'It's also interesting because Hal comes from a similar background.'

Another project for the future is her own radio show. She plans to do it with a girlfriend. The idea of the show would be to have a good time, have a laugh, and play music. She's still contracted to make two more albumsso the song-writing will continue.

It's not often you get to meet really happy people. Kim Wilde has certainly found the right balance at the moment. 'What's important is your involvement with the rest of your life, and with everyone around you and enjoying the passing of time.' 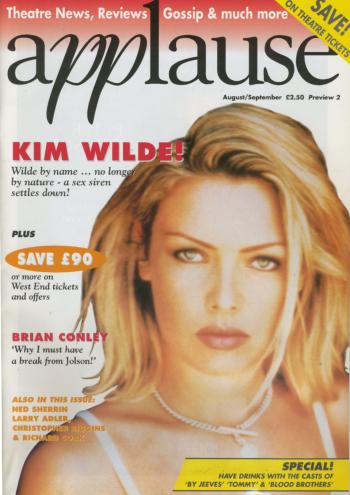 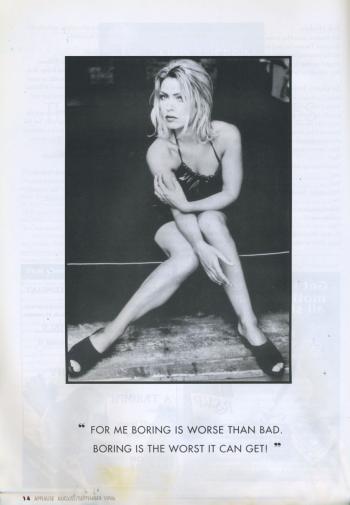 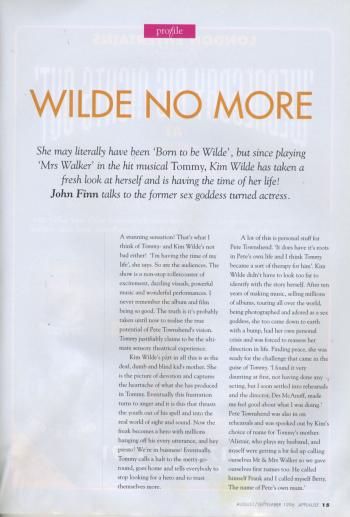 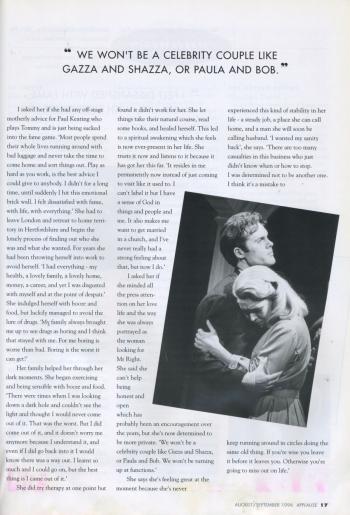 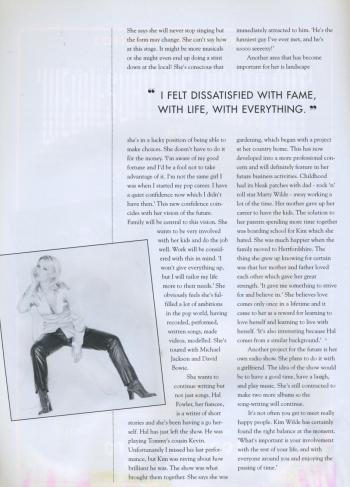