In skin-tight black leather trousers and the clinging tops she favours, Kim Wilde does not exactly conjure up the image of a woman immersed in motherhood.

But for the next year at least, the strikingly beautiful singer will be making all the right maternal noises on the London stage in her starring role as Mrs. Walker in the £2 million rock opera 'Tommy'.

Pete Townshend's remarkable musical about a deaf, dumb and blind boy who finds ecstasy through pinball has won 24 major awards including a cluster of Broadway honours. Now 'Tommy' is set to repeat its New York success in London after an acclaimed launch at the Shaftesbury Theatre.

For Kim, the high-profile role of Tommy's mother in the West End has come after 15 years of uninterrupted international success as a singer, including a number one hit in America in 1988 with her version of the Motown classic 'You Keep Me Hangin' On' and supporting Michael Jackson on tour two years later.

Yet Kim is not afraid to confess that, despite her string of hit records around the world, she was still required to audition for the role made famous in Ken Russell's film version by Hollywood stra Ann-Margret.

Sales of 11 million singles and eight million albums meant Kim's vocal talent was unquestioned. But a full-lipped, golden-haired sex appeal which has prompted past comparisons with Brigitte Bardot and Marilyn Monroe was no guarantee of an acting ability to go with it.

"I was very nervous", Kim readily admits, "because until 'Tommy' i had never auditioned for anything in my life before. But I reckoned that as I had performed with Michael Jackson and presented 'The Big Breakfast' programme on television, then I could do anything. I'm not afraid of a challenge."

Although she remains delightfully youthful, startingly pretty and happily single at the age of 35, the role of Tommy's mother holds no terrors for Kim. She has been familiar with all the songs since the age of 12 when her father Marty first bought the original album by The Who and played it constantly. Marty is still fondly remembered in Britain for his 1950s hits 'Teenager in Love', 'Rubber Ball' and 'Donna', and Kim acknowledges his influence in nourishing her own early musical tastes and ambitions.

"Dad was always so encouraging", she says. "I grea up listening to that great Beach Boys album 'Pet Sounds', Simon and Garfunkel, Joni Mitchell, Kraftwerk - he had great taste. I never felt the need to rebel against my parents because they loved the same sort of music I did. 'Tommy' was always a favourite at home. When the news about 'Tommy' dropped through my letterbox, I knew I could murder those melodies."

Written by the group's guitarist Pete Townshend, 'Tommy' gave pop music a giant kick forward when it was first performed by The Who back in 1969 and its arrival in London's West End is a major event. Conceived and crafted as a rock opera, 'Tommy' was nearly as important to pop music as The Beatles' 'Sgt. Pepper's Lonely Hearts Club Band'. It brought a new dimension to pop and in its 26-year history 'Tommy' has enjoyed huge success as a best-selling album, a film, a concert and a ballet. In addition, snatches of 'Tommy' were always a highly-acclaimed feature of live performances by The Who. On tour, no Who concert was complete without Townshend's crashing guitar chords matched with Roger Daltrey's soaring vocals as Tommy pleads: 'See me, feel me, touch me, heal me.' The song remains one of Townshend's most resonant melodies.

While The Who were still a touring band, 'Tommy' the rock opera was never forgotten. But, following the death of The Who's drummer Keith Moon and the remainder of the group's reluctance to undertake yet more gruelling tours, the time was ripe to re-launch 'Tommy' as a musical once more. Opening on Broadway in April 1993, 'Tommy' won rave reviews and was a smash hit with New York audiences. The transition to London was only ever a matter of time.

The story of 'Tommy', played by newcomer Paul Keating, hinges on the boyhood experiences of Tommy Walker, notably when he witnesses the murder of his mother's lover allegedly by his father. This traumatic experience, coupled with his parents' insistance that he neither saw nor heard anything, turns Tommy deaf, dumb and blind. Later, thanks to his sensitivity to touch, he becomes a master at pinball.

Happily for Kim, winning the role of Mrs. Walker has come at a time when she has been seeking a more stable period in her life after so many years of flying round the world living the often rootless existence of the hit singer - another concert in another town and staying in yet another hotel. She welcomes the routine of appearing on the same stage every evening and the prospect of being able to return to her own home every night once the curtain has come down.

Last year she considered settling in Australia after a highly successful tour which saw her greatest hits album selling in vast quantities. But Mrs. Walker has changed all that. Now she can comfortably commute to the Shaftesbury Theatre from her home in Hertfordshire, see her friends and family on a regular basis, and allow herself a life away from the limelight.

At 35 she has come a long way fro mthe green, nervous newcomer who burst into tears with emotion after her first live appearance in Stockholm back in 1981. Two years later the British record industry voted her Best Female Singer and now she exudes a confidence born of maturity and continued success.

Inevitably for such an attractive woman, Kim has no shortage of male admirers. There have been men in her life but she is determined not to surrender her single status until Mr. Right comes along. For the moment, Tommy is the boy for her. 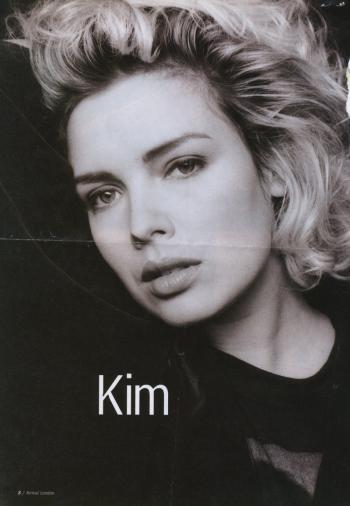 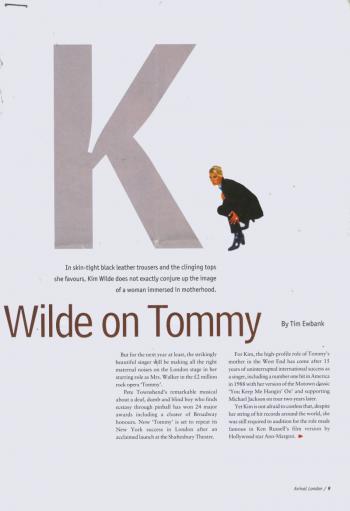 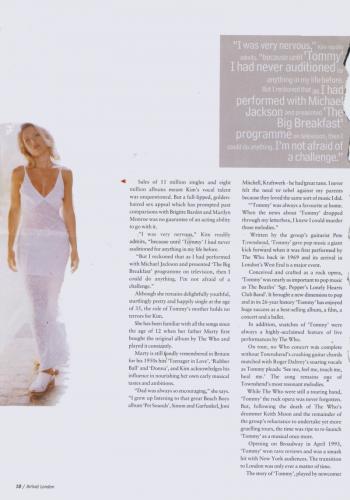 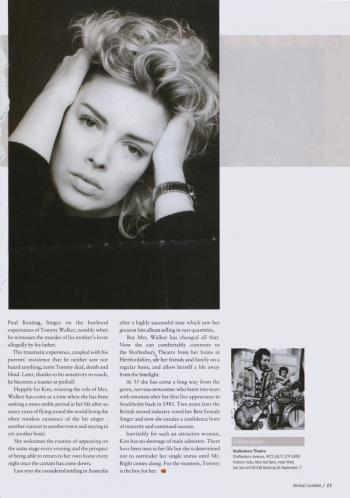