Kim Wilde is older and wiser - and feeling better than ever. Next month she launches her new single in Yorkshire.

Sultry singer Kim Wilde burst onto the music scene in the early 80s in a blaze of leather jackets, ripped jeans and a mass of dishevelled bleached blond locks.

A mere 20 years of age, her first single Kids In America sormed the charts, catapulting her to fame along with the likes of the Human League and OMD. Her career continued to rocket into orbit with more hits, musical awards, TV appearances and, of course, a supporting role during Michael Jackson's 1988 World Tour. Now, 15 years later, she is still going strong. Older and wiser, she looks and feels better than ever before. A combination of a strict exercise regime and sensible eating have made their mark on the daughter of 50s idol Marty Wilde. She looks toned, fit and glowing with health.

"I have been keeping fit", she admits. "The whole of last year, I was going down to the gym, taking care of my diet and learning to roller-blade. I suppose I'v egot a pretty good regime. I am not a fanatical dieter, but now that I'm older I'm more aware of what food suits me."

Looking back fondly on those early days, Kim says it was an exciting and fun time. Yet, while other 80s pop stars fell by the wayside, Kim has ever strayed too far away from the charts. "I think it's because my feelings towards music have always been so strong", she muses. "I love what I do, I love singing. I surround myself with people who are into the work that I do. I have worked with some very talented people, not least my brother Ricky and my dad, who've helped me a lot in the past."

Her new single, This I Swear, is released next week. Kim is also busy rehearsing for her screen debut in the West End musical Tommy which starts next month. She plays the leading role of Mrs Walker in the award-winning Broadway hit written by The Who's Pete Townshend - and she is loving every minute of it.

"I'm currently doing rehearsals and it's just incredible. Every day, I can't wait to get there. I don't know if another musical could entrance me as much but it's something I would definitey think about doing again."

Her success means she has regularly courted publicity - not all of it welcome. Although she tries to keep her private life away from the papers, her relationships remain a source of interest to the media, particularly her liaison with DJ Chris Evans.

"I think it comes with the territory", she says. "There have been times when it's just been too difficult for me to handle. It's bad enough when your life isn't going the way you want it, then to have it magnified in the press just makes it seem worse. But I have become philosophical about it. At the moment, I'm happily single. I've had some really lovely boyfriends and had a great time until we felt we'd outgrown each other. Now I have lots of friends and I have people I occasionally date. I love going abroad whenever I can and now I have the freedom just to go away with a girl friend or a boy friend."

> Kim Wilde is appearing at Meadowhall, Sheffield, on Thursday, February 1 at 5pm to launch her single This I Swear. During the free event, described The Biggest Ever Shopping Mall Show, Kim and her five dancers will be performing five numbers on a huge stage with a spectacular lighting show. 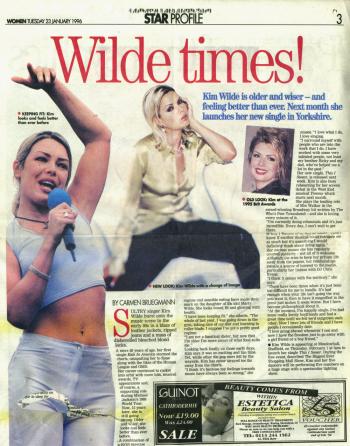