Tommy, the West End musical which brought stardom to a shelf-packer at Tesco, brought The Who back into the limelight, and which saw two of the show's principal performers get married, is to close. Audiences have failed to share the delight of the cast, or that of the composer Pete Townshend or the critics who lavished rave reviews on Townshend's transformation of his 27-year-old rock opera into a family musical. The show opened last March at the Shaftesbury Theatre, renewing interest in the music of the The Who.

Two of the stars, Kim Wilde, who played Tommy's mother and Hal Fowler, who played Cousin Kevin, fell in love offstage and married. It also brought stardom for the unknown 20-year-old Paul Keating who auditioned for the title role in the show between his shifts at Tesco. A spokesman for the show said last night: "Paul is shocked and disappointed like all the cast. But he will not be returning to Tesco. After his performance in Tommy he can look forward to a great future as an actor."

Tommy was a worldwide hit for The Who as a double-album rock opera in 1969. Townshend turned it into a musical for Broadway a few years ago, despite some unease from fellow members of the group. The Who's singer, Roger Daltrey, the original Tommy, felt that some of the vitality and raw-rock aggression of the original had been lost from the stage musical.

But after a successful Broadway run the show was launched in London last March, and, with its rave reviews, looked set for a lengthy run. However, it was announced yesterday that the pounds 2.5m musical will close within weeks because of dwindling ticket sales. Ironically, the production has received eight Olivier award nominations, the highest number for any show in a West End theatre.

But, despite the critical acclaim, audiences have failed to warm to the show in sufficient numbers at a time when London is brimming with lavish musicals. Tommy's producer, Andre Ptaszynski, said: "It's been hard establishing the show, although it has had great reviews all over the world.
We had a very strong autumn but we are not going to sustain it through the spring. It will go on a year-long national tour from this September."

Paul Keating said: "We have not been given firm dates for it ending. Houses are unpredictable with the show and it has been a bit of a battle to keep it going. We've run a year and won eight nominations. But that's the way it goes."

Tommy may now close before the Laurence Olivier Award winners are announced on 16 February. 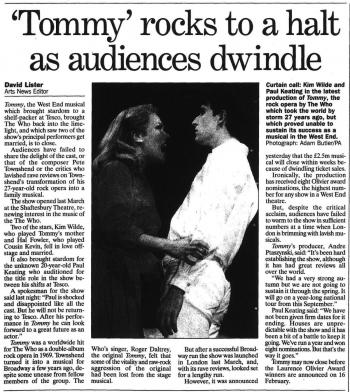