You've Let Yourself Go was a gorgeous song by Charles Aznavour; a real old chanson, in fact, though only the English tongue could have pulled off the pun properly. In it, the narrator is getting ready to go out with his wife to celebrate their 20th wedding anniversary - but when he goes to do up her dress, the zip breaks. Cue song about how she's gone downhill, not the girl he married etc until, at the end, he has to admit that he's a bit of a slob, too, so - 'Come close to me and . . . let yourself go.' The phrase came to my mind last week, the week in which those pictures of Kim Wilde were published. Kim was, you'll remember, the toppermost of the poppermost sex sirens in the shimmering, simmering Eighties; the eyes of Monroe, the mouth of Bardot and the sneer of Elvis, all strained through a candy-coloured punky muslin. She was one of those girls - like Louise today - who men like to think of other girls being jealous of, but was actually just so gorgeous that, whenever you saw her, you wanted to stand up and cheer, as though she was a beloved football team. Just by being female, she seemed to reflect well on all of us.

Next to her beauty, the thing that singled out Kim from the other pouting pop strumpets of the Eighties was that she seemed almost eerily well-balanced. They say that what makes a star is not that little something extra, but that little something missing - well, Kim obviously had all her bits in fine working order. Because of this, even though she supported Michael Jackson on one of his European tours and was never off Top Of The Pops, she never quite made it in the style of her screwed-up contemporaries - Jackson, Prince, the Georges Boy and Michael, Madonna. Like her soulmate, Sade, who similarly slipped into singing as a convenient way to make big money, she seemed totally undriven, especially by demons, and once she had put aside something for a rainy day and found a suitable candidate to cocoon with, she just slipped away of her own free will. Last week, photographs showed her literally unrecognisable as her former siren self; a 37-year-old mother living in Hertfordshire, happily married and triumphantly overweight.

I say 'triumphantly' because, when a woman known for her beauty lets herself go these days, it looks like triumphalism. It says I Don't Need You: Please Don't Fancy Me; I Don't Want My Dance Card Ticked, Thank You. But we have become so used to a climate in which women strive to be attractive to men right up to and beyond the menopause that it strikes us as the height of weirdness for a 37-year-old woman, once a great beauty, to surrender to gravity in a way that was once totally taken for granted.

I blame Demi Moore. Posing naked and pregnant in full make-up and jewellery, Demi was alleged to be celebrating the natural beauty of child-bearing, but actually looked like one of those specialist pregnant prostitutes so beloved of very kinky men. As with most things that American females claim 'empower' women, Moore gave her lazier, less neurotic sisters yet one more jump to fall - or refuse - at. In the past, pregnancy had always been the perfect excuse for a woman to slob out, pig out, get off the treadmill of attractiveness. Now, you had to be bejewelled and painted even as you went into labour, or you were letting the side down.

Within a year, Moore was back on the cover of Vanity Fair, naked again but for body paint, her body even buffer than before. Three children; three returns to her fighting weight. Often exercising for four hours a day - a quarter of her waking life - Moore became the logical conclusion of a culture that judges women on their appearance; she spent so much time and energy on her looks that her acting and her marriage - which presumably her hard work on her physical self was meant to secure - fell by the wayside. She lost her credibility to a new generation of film beauties who insisted on no nudity clauses in their contracts, and her husband to a chubby, cheerful waitress whose idea of exercise was to carry two bottles of beer in each hand.

'How could he?' we wail of Bill and Monica; not questioning his right to philander, but his taste. Faced with the blowsy beret-wearer, we all become the judge who was so struck by Mary Archer's 'fragrance' that he could not countenance her husband copping off with a heavyset hooker.

With slim, groomed Hillary at home? But in our incomprehension, we are victims of the modern myth that any thin person is more attractive than any fat person; as Jackie Kennedy and Marilyn Monroe proved a long time ago, it ain't necessarily so. Perhaps the widespread acceptance of this silliness is the reason the thin, less than beautiful columnist Lynda Lee-Potter feels justified in pillorying the big, beautiful actress Kate Winslet over her weight.

I'm not being nasty, but those who write pieces about people losing their looks were never beauties themselves in the first place. And so, naturally, they prize beauty far more than someone who has had it since they were 12. In the recent round of interviews I did this year to publicise my books I Knew I Was Right (Heinemann) and Diana (Weidenfeld), it was not the attractive people who commented on my physical decline but rather the plug-ugly ones, mostly male; a bigger selection of bum-faces, trolls and chrome-domes you never saw in your life. Often, I feel the pressing question about man is simply this one: don't any of them ever look in the mirror? It's like what men say about having breasts: 'You'd just lie around playing with yourself all day, wouldn't you?' Of course you don't. It's the same with beauty; often, it just gets boring, not least because of the unwanted attention you get from men. 'I finally did the one thing I knew would put him off me,' Marianne Faithfull has recalled gleefully of Mick Jagger. 'I let myself get fat.' Easy come, easy go; it is the sheer go-to-hell sensuality of letting oneself go that those not born beautiful will never understand: the fact that beauty, to be enjoyed at its best, must be used, like fuel, not pickled like fruit. Kim Wilde understands, and for achieving wisdom she has received a great gift - the assurance that never again will Chris Evans want to have sex with her. And for that, she must be truly thankful. 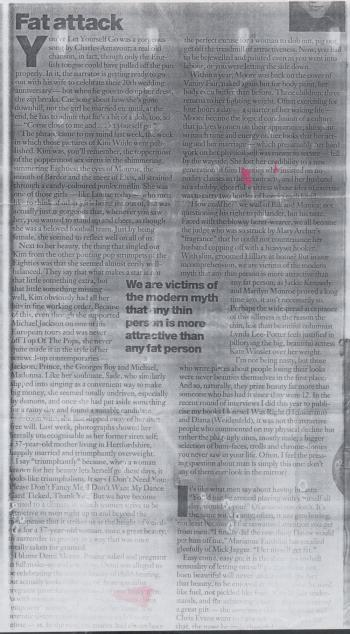