I met Kim Wilde in 1981 just after the release of her first single, 'Kids in America'. She was just 20, on the brink of stardom, and ravishing. She was wearing a t-shirt emblazoned with Brigitte Bardot's face, although Kim didn't realise who she was. She'd just bought it because she liked the face, perhaps because it was so like hers. And she was very sweet. She was thrilled that I knew Adam Ant and overcome by the fact that I'd had lunch with him just before we met. In 1983 Kim was voted Best Female Singer at the BPI Awards. She has had No. 1 singles in the USA, France, Germany, Australia and Scandinavia. In 1994, she was a stand-in co-presenter on 'The Big Breakfast'. In 1995 she played the female lead in the West End production of the musical, Tommy, for a year. Kim married actor Hal Fowler in 1996. They live in Hertfordshire with their seven-month-old son, Harry. We met in the family recording studio in Hertfordshire, where she's completing her 11th album, which will be released later this year.

'Since we got married and I've lived more or less a private life, my heart has gone out to any woman in the public eye - like, say, a Spice Girl - who puts on a few pounds. I've thought: 'Oh God, poor girl. It's your turn now.' Because that's what happened to me. People had a real go at me just because I was a bit bigger. When you're in the public eye, there's real pressure to look good and sometimes it can be just too much to bear.
Harry Tristan was born on January 3 this year and we're so lucky to have him in our lives. I loved being pregnant. It was a wonderful excuse to eat what I wanted and not worry about my weight. I didn't overdo it, so I didn't put on much until near the end. Plus I was off alcohol completely, my body just rejected it. One sip made me feel sick, so I was clear-headed,the whole time. And when you don't drink, you don't eat so much. I put on about two stone and wore a size 14 through the pregnancy, which is more or less what I'm wearing at the moment. It's a bit hard to shift at the moment because I'm still breastfeeding Harry and working on an album. It's been an intense six months - making an album and weaning a child. In the early months I was breastfeeding him in the studio. Over the vocals you could hear this sweet little snuffling, sucking noise.
My weight always used to fluctuate because I'm a foodie. I love food in all its guises and it's so easy to over-indulge in the music business. You're consistently spoiled rotten.
From the time I had my first success I stayed at the best hotels around the world and was always taken to incredible restaurants. And faced with a very good dish, it's hard not to finish it, isn't it? So gaining weight was more down to the social aspect rather than any big depression. After a few years, I'd flown the family nest and bought a flat in London, but most of the time I spent travelling and working. A slog but fun.
When I came home there would be nothing in the fridge but some milk that wasn't very nice. And I couldn't really cook in those days, so I spent a lot of time going out with my mates and various boyfriends. It was a gradual process. It wasn't bingeing and it certainly wasn't bulimia or any other eating disorder. I was just eating more and more.

Then food did become a comfort when I was a bit down. I got used to being a little bit bigger than skinny and then a little bit bigger than bigger. I couldn't say it was a lonely life working on the road but I did get lonely sometimes. In my more melodramatic moments I could see the sad contrast between the girl that kids seemed to want to be with, and perhaps fancied a bit, and the reality - my love life was crap and I was sitting in this hotel roo mall on my own.
Booze was a major contributory factor. I didn't know that alcohol had any alories until I was 28! It was a very odd concept to me that liquid could be fattening. And I did like wine far too much... both red and white.
Being on tour you always end up in the bar. I mean, after you do a gig, completely wound up from this fantastic experience, what are you going to do - have a cup of tea?
So, yes, alcohol has played quite a part - although, fortunately, not to alcoholic levels. I can tell you that it's so much a part of the lifestyle, it's hard to resist, but certainly I can also drink a fair amount of wine, when allowed. I've woken up with a few hangovers.
I put on about two stones and went from a size 10 to a size 14. I didn't really get that big. I mean, it wasn't like it was there or four stone, but it was enough to not look great, and it showed. I was 30 and I was partying a lot, drinking too much.
Eventually it was pointed out to me by my family. They sat me down and said: "It's all very well, Kim, if you want to pile some pounds on. If you're happy with that, that's wonderful. But if you're not happy and you'd like to get on with your career and your life you might think about losing some."
It was a bit of a shock at the time, but I didn't resent them. In fact I was very grateful to them for having the guts to tell me the truth. And deep down I was really pissed off with myself that I hadn't confronted the situation. I'd just pushed it back down somewhere inside me.
When they said it, I just thought: 'Oh God, yes. I really am letting things go, and I don't know why. I don't want to.' I really had, too. I'd become disillusioned. It was hard to keep the energy up and be positive when the latest album hadn't been so successful. Other artists were coming up and doing well and my confidence was being chipped away. There was a time when people would constantly compare me to Madonna, and not very favourably. In the end I lost the plot.
I didn't have that fire. I'd had it doused by life and relationships and I'd let it defeat me. But that's not my realy personality, and when they said that, the real me came to the fore, like the hero coming in a bit late on the charger at the end of the film to save the day - dadadada!

The Boadicea in me came along. I thought: "Stuff all this, I'm going to be a happier, more alert, more positive person."
I stopped drinking and lost ten pounds very quickly. More important, I discovered that exercise is the key to keeping everything from going crazy. Get rid of all the crap.
In fact exercise helped me get out of the depression - running helped me work off some of the anxiety. If I'd discovered that in my twenties I might not have let everything go.
And then I got down to the gym and got back in shape. I made it part of my lifestyle and it remained so until I got pregnant last year!

My biggest weakness
I'm a real foodie, but alcohol is also hard to resist, although I'm certainly not an alcoholic. I can drink a fair amount of wine, when allowed, and I have woken up with a few hangovers, to say the least.

My worst moment
I put on about two stone and went from a size 10 to a size 14. It wasn't like it was three or four stone, but it was enough to, how can I say it? I didn't look great, and it showed .I was 30 and I was partying a lot at the time.

My moment of truth
My family sat me down and said: "It's all very well being like that if you want to pile some pounds on, and if you're happy with that, that's wonderful. But if you're not happy, you should think about losing some."

My slimming tip
Exercise is the key to keeping everything from going crazy. It is the answer for me. Running helped me work off some of the anxiety, and I love exercise classes. Imade going to the gym a part of my lifestyle until I got pregnant last year.

My health tip
Organic food. We sorted out the garden last year and now it's full of fresh organic stuff, which tastes amazing. I knew nothing about growing vegetables so I went to the local horticultural college for several months when I was pregnant.

My shape now
I would not be confident enough to go to the beach at the moment. Maybe in a few months. I'd like to lose two stone, although people tell me I only need to lose half of that. But I know better. 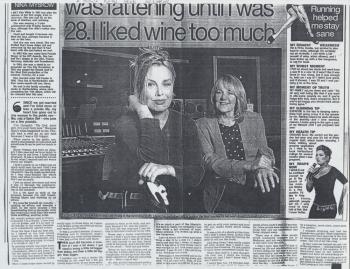 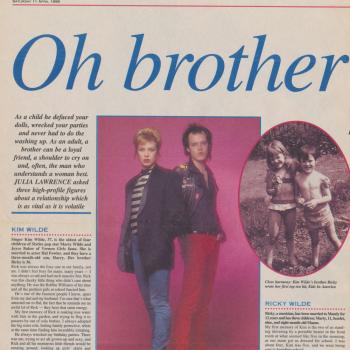