As a child he defaced your dolls, wrecked your parties and never had to do the washing up. As an adult, a brother can be a loyal friend, a shoulder to cry on and, often, the man who understands a woman best. Julia Lawrence asked three high-profile figures about a relationship which is as vital is it is volatile.

Singer Kim Wilde, 37, is the oldest of four children of Sixties pop star Marty Wilde and Joyce Baker of Vernon Girls fame. She is married to actor Hal Fowler, and they have a three-month-old son, Harry. Her brother Ricky is 36.

Rick was always the foxy one in our family, not me. I didn't feel foxy for many, many years - I was always so tall and had such massive feet. Rick was this cheeky little thing who didn't care about anything. He was the Robbie Williams of his time and all the prettiest girls at school fancied him. He's one of the funniest people I know, apart from my dad and my husband. I'm sure that's what attracted me to Hal, the fact that he reminds me an awful lot of Rick - they have that same energy. My first memory of Rick is making rose water with him in the garden, and trying to flog it to passers-by out of cola bottles. I always adopted the big sister role, feeling faintly protective, while at the same time finding him incredibly irritating.
He always wrecked my birthday parties. There was me, trying to act all grown-up and sexy, and Rick and all his monstrous little friends would be running around, looking up girls' skirts and kicking footballs around. I didn't have any room for him in my life until we got much older and started working together.
I set out to be a singer from day one, whereas Rick wanted to be a footballer. Then he turned out to be a natural musician. Rick can turn his hand to anything, whether it's a guitar, a golf club, a tennis racket or the entire contents of a recording studio. I was always the more academic one.
We've travelled allover the world together. He was a great escort and a passport to all sorts of fun. It felt much more comfortable to be in a nightclub with my brother than on my own.
It is in my nature to be sensible, and if Rick and the boys hadn't been there, I probably would have listened to all those record company 'chaperones' who wanted me to be in bed nice and early, sober, and up bright and early for interviews. As it was, I got to enjoy being young and famous and having fun.

The only things we ever scrapped about as adults have been to do with music. It's only natural to disagree occasionally -but Rick's opinion has usually been the more sound.
The fact that I got all the attention in our working relationship never caused any problems, because I knew that wasn't what he wanted. He used to say to me: 'I don't know how you do it, getting up and doing all that stuff all the time.' He did it alongside me for a couple of years, but then he fell in love with Mandy and wanted to concentrate on that.
Rick and I were brought up around this great, continuing, love story of our parents' marriage which I desperately wanted to emulate. The older I got, the more concerned I grew about not doing it and I was staggered when it happened to Rick so effortlessly. But he taught me that when it happens, when it is right for you, it is effortless. It's not the big, uphill struggle I feared it was.
I can talk to Rick about anything. Rick's good at dishing out advice; he sees life in black and white, as I've learned to over the past few years.

Ricky, a musician, has been manied to Mandy for 12 years and has three children: Marty, 11, Scarlet, nine, and eight-month-old Mason.

My first memory of Kim is the two of us standing shivering by a portable heater in the front room at what seemed like five in the morning, as our mum got us dressed for school. I was about four, Kim was five, and we were being sent to boarding school.
It was a pretty awful time for us. Dad was doing a lot of shows at the time and Mum wanted to join him, so we didn't get to see them much, and it was always a massive wrench to leave. I didn't get to see much of Kim either as the girls were put in one block and the boys in the other.
After a couple of years the family moved to Hertfordshire and we went to the local primary school, which was much nicer. We went home every night and Kim and I had a normal brother-sister relationship. We scrapped pretty solidly until we were 14 or 15 about anything you can think of. Kim was always the quiet, studious one while I was the confident, bullying control freak. She wasn't even particularly attractive - that came much later. When I picture Kim as a child, she's wearing jeans and a T-shirt; she was never pretty or girly.
Then, when she hit 17 or 18, she suddenly became absolutely stunning; it was an amazing transformation. All my mates really fancied her. They would come round to my house and all they wanted to do was talk about Kim, while I wanted to play footie. I couldn't believe that anyone would fancy my sister. Around this time I wrote the song Kjds In America. A record producer saw Kim singing backing vocals and said: 'I think we can do something here.' That was my cue.
I was never jealous of Kjm taking the limelight. I was much happier in the background, writing and producing I can honestly say mat I have never wished, once, that it was me up there.
Even when Kim was her at most famous, our relationship never changed. We were incredibly close - we worked, socialised and toured together. People assume it must have been claustrophobic, but it wasn't.
I got married long before Kim and started a family fairly quickly. It must have felt strange for her being the older one, that I 'beat her to it', but she didn't say anything. Kim went through a very low stage a few years ago, basically due to loneliness. Even though she had loads of friends and was always the life and soul of the party, eventually everyone always went home and she would be left stuck in me middle of her beautiful, massive home, all alone. I'd get a phone call and would go round and chat. I got pretty worried about her.
I've never seen her happier now she's got Hal and little Harry. Sbe and my wife are constantly on the phone, swapping baby tips, passing on clothes and prams and all that stuff. We see each other two or three times a week - babies permitting. 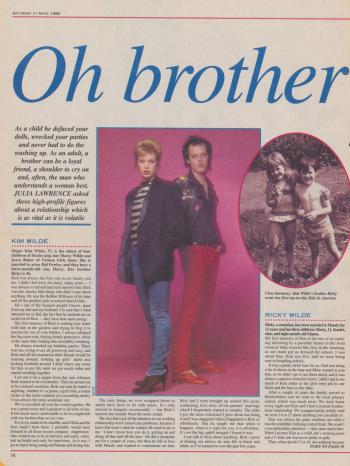 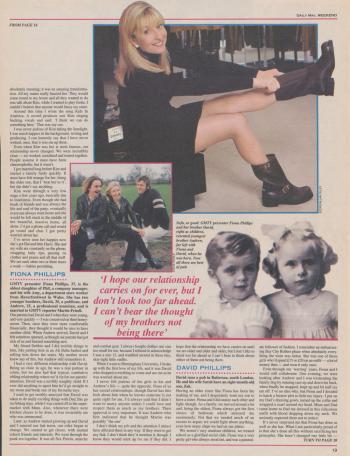