Kim Wilde has cancelled plans to bring out a single this year after unflattering pictures of her were published in tabloid newspapers.
Ms Wilde, recently married and a mother of a seven-month-old boy, is considering a protest to the Press Complaints Commision over the photographs, which a newspaper claimed had been taken in a supermarket car park.
According to her agent, she was on the way to listen to a demo tape in an office, on private property. Nick Boyle said it seemed that the photographer had hidden in bushes to catch her. He said she was so upset that plans to restart her pop career were being delayed.
He added: "We are just putting the finishing touches to a solo album. We had contemplated putting out a single this year, but we are not going to do that. It is not all completely related to the photographs, but it will be easier to do it in the New Year." 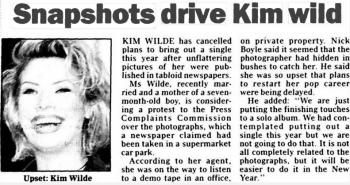