My friend Tracey has just announced that she will be glued to the first episode of Better Gardens, which, it emerged last week, will be presented by ex-pop star Kim Wilde. Over the last couple of years I've given Tracey several plants which should have been able to survive the nuclear winter that is her concrete window box on a council block in Brixton. None of them are alive today, but that is not why she will be watching Better Gardens, which is currently in production. Tracey hates plants but, like the rest of us, she can't wait to see Kim Wilde present a garden series.

Meanwhile, in a world where quaint neckwear and a doctorate may still command respect for all we know, Stefan Buczacki has been worrying. It was reported last week that he thinks Kim Wilde is too much of an amateur. Apparently it wasn't like this in the old days, when all the presenters had professional qualifications and a lifetime's experience in the vegetable plot behind them. You may even remember Doctor Stefan himself from this golden age, droning on like the sort of schoolteacher you thought you'd left behind forever when you dropped chemistry. It was either him or the bloke crouching in a very straight row of carrots, and both of them made a good case for gardening being something that was best left to the experts.

Fortunately for me there was no obvious connection between the Bearded Ones on the box and my growing obsession with gardens. They assumed that you had a greenhouse, favourably sited on a piece of ground which you would occupy to the end of your days. I was incontinently falling in love with a series of plants and finding out, by trial and error, whether I could keep them alive and fit them into a peripatetic existence. Gardener's Question Time on Radio 4 might have been helpful, were it not that the pomposity and dullness of Stefan Buczacki made one too angry to digest any information.

Anything I know about plants comes from experience; from talking to friends, both professional and amateur, both knowledgeable and naive (and there are naive professionals just as there are knowledgeable amateurs); and from reading the journalism and books of the great garden writers, the greatest of whom are living and writing now. I can't remember ever learning anything off the telly, but I do remember wishing that the flowers were better photographed and the presenters more entertaining.

Whoever it is who decides how telly should be has been reading my mind because the flowers these days are photographed pornographically well and the presenters, though a mixed bunch, are, every one of them, infinitely more entertaining than the old doctor ever was. While I may not be a bloke who plays for the team who has to loosen their trousers at the sight of Charlie Dimmock, I can still appreciate the entertainment value of watching Alan Titchmarsh strain under the conflict between maintaining his respectability and asserting his heterosexuality in her presence.

Even Monty Don can be entertaining to those of us who can find pleasure in watching an imbecile fawn ingratiatingly in front of strangers.

So what that the telly is all makeover gardens and instant landscapes? Isn't that what Chelsea has always been about? It's for entertainment, and inspiration and escape that we watch the telly. Yes, we might, one day, need to know how to deal with fruit tree red spider mite, but should we have to wait in front of the telly for some dry old boffin to deign to advise us, or should we be able to just reach down one of those reference books that Doctor Buczacki is so snippy about? And why shouldn't the presenters be amateurs and people who are prepared to admit that they've made mistakes? It's only telly for God's sake. Anyone who's really keen is watching ironically, which is better than the old days when Stefan was on and anyone who was really keen couldn't bear to watch at all.

Which might not exactly bring us back to Kim Wilde, but that's where we're going anyway, and so what? Shouldn't we be glad that even pop stars get to like plants when they're older? Shouldn't we be jumping up and down that garden fever is sweeping the nation and tree ferns can be bought for a song at any garden centre? Some of us are excited by what's going on; are making the most of it, knowing this fad can't last forever (or can it?). Others have had their nose put out of joint by the fact that the world has moved on and they look like dinosaurs.

This is a volatile society. We need instant gardens and instant gardeners. There is nothing I'd love more than five acres to plant trees in and watch them grow but for now I'm stuck with eight square meters of roof garden. It doesn't stop me buying and propagating and giving away and, like a lot of people, I might have to leave the whole lot (and there is a logistic-defying amount) behind tomorrow and start again.

And then there's my friend Tracey. She has never, in her life, watched a garden programme, and now she will. Who knows, she might get the bug? That window box in Brixton might become a garden yet. And even if Kim Wilde is laughable, we'll have a good laugh. You can't reasonably ask more than that from the telly. Whatever happens, you can be sure it'll be a sight more entertaining than watching death in a dickie-bow. 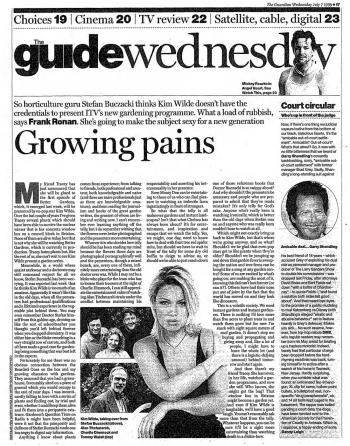