Grow your own Christmas decorations

This is a time for kissing under the mistletoe and decking your home in holly and ivy. They're all a quintessential part of Christmas, but why?

A kiss under a sprig of mistletoe has long been regarded as a sign of lasting friendship or romance. This gesture goes back to ancient Greek festivals and later primitive marriage rites, tying in with the belief that mistletoe has the power to bring fertility. Early herbalists also revered the plant for its power to cure epilepsy.
One of the earliest legends is that mistletoe is the sacred plant of Frigga, the goddess of love, and mother of Balder, god of the sun. Frigga was alarmed after her son dreamt he would die, which would end all life on Earth. She went to the elements - air, fire, water and earth - to animals and plants seeking a promise that no harm would come to her son. But Balder had one enemy, Loki, the god of evil and he knew of a plant that Frigga hadn't thought of - the lowly mistletoe. So Loki made an arrow tip of it and Balder was shot dead. For three days each element tried to bring him back to life, but to no avail. Balder was finally restored to life by his mother. It's said that the tears of joy she shed turned into the pearly white berries on the mistletoe plant and in her elation she kissed everyone who passed beneath the tree on which the mistletoe grew. The story ends with the decree that no harm should befall the person who stands under the mistletoe, only a kiss, a token of love.
Mistletoe is an aerial parasite that attaches itself to host trees for nutrients and water, although it can make its own energy from photosynthesis. If you're thinking about growing some yourself, bear in mind that the berries don't become ripe until February or March. Rub the sticky white berries into cracks in the bark of a tree - preferably lime or apple - or cut a notch into the bark to keep the seed in place. But you 'll have to be prepared to wait a few years for any results.

Holly
Pagan Romans thought holly was the sacred plant of Saturn and honoured him by exchanging holly wreaths and decorating statues with it. These festivities coincided with the time of year when Christians celebrated the birth of Christ. These early Christians could avoid persecution for their beliefs by decking their halls with boughs of holly. However, for :hem, holly leaves symbolised the crown of thorns and its berries, the blood of Christ.
For gardeners today, holly is a great hedging plant, its prickly eaves keeping out all but the most persistent intruders. Its leaves and berries bring colour to a bleak winter landscape, as well as providing food and shelter for birds. Holly will thrive in any position and is best planted in spring and autumn.

Ivy
Ivy's ability to smother grape vines had ancient herbalists believing its berries could cure the ill effects of too much alcohol. It has also been suggested that the popular carol 'the holly and the ivy' is a veiled satire on the battIe of the sexes, with the red-blooded, prickly holly as the masculine and ivy as the weak feminine plant. Ironic then that red berries only appear on the female holly tree.
Evergreen ivy is a perfect contrast in shape and texture to holly. In the garden it's useful for covering ugly walls, sheds or fences and will thrive in shady or damp areas - but be careful that it doesn't get a stranglehold on your favourite plants.

Christmas tree
One of its popular legends is the story of Saint Boniface, who came across a group of pagans gathered around an oak tree. The pagans were about to sacrifice a child to the god Thor. Boniface stopped the sacrifice by felling the tree with a mighty blow from his fist. In its place grew a small fif tree and Boniface told the pagans it was the tree of life. Prince Albert, Queen Victoria's husband, made them fashionable in this country by decorating the first English Christmas tree at Windsor castle in 1841.
Nordman firs are a popular garden tree - if you buy a potted tree at Christmas, you may be able to transplant it into your garden. Gently acclimatise it by putting it into the garage for a few days once you've taken off the decorations. Dig a deep hole and fill it with good compost. Plant the tree, water it well and keep your fingers crossed.

Poinsettia
Has your poinsettia good. strong growth, a mass of green leaves but no sign of Christmas colour? Don't worry. Remember that commercial nurseries use closely monitored temperature controls day and night to get the best blooms. If your poinsettia won't flower at Christmas, don't get stressed out. Be happy with your homegrown beauty and enjoy it whenever it flowers. 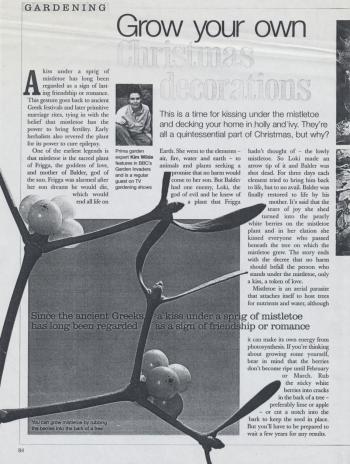 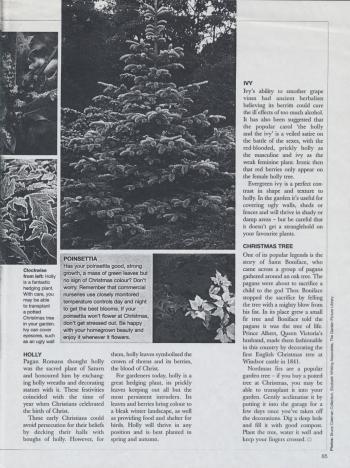