Kim Wilde, singer and presenter, and Joyce, her mother and agent.

Kim Wilde, 38, is the daughter of the singer-songwriter Marty Wilde, the 1950s pop idol. Kim launched her singing career in 1981 with the song Kids in America, written by her father and her elder brother Ricky.
She went on to sell 11m singles and 8m albums. In 1995 she starred in the West End production of Tommy. She livcs with her husband, Hal Fowler, and their two children, Harry, 2, and Rose, 8 months, in Hertfordshire. Kim is filming a new gardening series, to be shown on BBC 1 next spring, called Garden Invaders. Her mother, Joyce, was one of the Vernons Girls, a singing and dancing troupe. She set up Big M Productions in 1978 and managed her husband and later Kim. She has been married for 40 years and bas three other children: Ricky, Roxanne, and Marty. She lives in Tewin, Hertfordshire, close to Kim.

Joyce: I was pregnant with Kim at 18, so we've really grown up together. In our day we were ready to be mums and wives at that age, but I now think it should be against the law, because it was very hard work. When Kim was three, she caught meningitis when Marty and I were away in Liverpool. She was very sick, and my heart just went into convulsions. They had to call a doctor to sedate me for the joumey to London. I had my full make-up on from the show and I was crying. I got to the hospital and threw my atms round her, and she said: "Oh, Mummy, you look beautiful."
Kim and I are mentally linked, so I always know when something's wrong. It's the same with her dad. On the way to the hospital, Marty suddenly stopped the car and said: "Shush... she'll be all right now:' He looked at his watch, and later we found it was at exactly that time the crisis was over. Kim and I are very alike and we used to clash terribly. When we argued, she'd always phone to let me know she was all right. I'd say: "And...?" "I'm all right". "And...?" "I think we're too alike." She'd never say sorry.

I've been pregnant most of my life and I lost 10 babies because I kept dilating at five and six months. During one pregnancy I lost twins. Kim was in her teens and went through the grief as well. She was fantastic - for the three months I was in hospital she did everything at home. She was very protective towards Ricky; she was like a little mum to him. I put an awful lot of responsibility onto her shoulders for a very long time. But she wanted to save the world, animals, people. In some ways, she gives too much of herself. For a long time Kim had very low selfesteem. In fact, all my kids are like that. Maybe they feel they can't measure up to the standards set by their dad. I don't understand it - I've always told them how special they are. I think a lot of Kim 's frustrations during her teens were to do with wanting to sing. I knew she had a talent, because she'd toured with us, doing backing vocals, but I didn't realise she had her own ambitions. I've never seen my daughter as anything other than beautiful. It wasn't in her contract that she had to be thin. The record company might not have liked it when she was slightly overweight, but she made a fortune for them, so tough titty. The press made more of it than there was. I don't think she was bingeing - I think she was a bit lonely.
The worst thing that happened to Kim was moving to London, because it can be the loneliest place in the world. We all used to go down and have meals with her, but it used to break our hearts to leave her in the flat on her own, although she always maintained she was happy and feeling all right.

When Kim was doing The Big Breakfast, I stayed in her flat and we had a wonderful time. A friend came and gave us a massage every night, then Kim would go to bed at 8pm. The script would arrive at 4am, and while Kim was doing her make-up I'd sit on the toilet and go through it with her. I was with her for the whole week, lurking in the background, seeing everything was okay. Recently I found a letter she sent me from school. She wrote: "I don't want us to go on holiday, I just want us to be together."

Kim: You didn't mess with Mum. Ever. If you messed, voices would be raised to heights you wouldn't want to hear, and the atmosphere would turn into something you didn't want it to be. It wasn't an ideal childhood because Dad was away a lot and Mum was the disciplinarian and she used to get stressed out. She had two little babies and she was trying to juggle all these things, like wanting to do what young people do and wanting to be with Dad.
Ricky and I were sent to boarding school for a year when we were four and five because they needed time together. It didn't do a lot for our confidence and caused a lot of unhappiness in our little minds. It was only afrer we moved to Hertfordshire, when I was eight, that our lives took off as a family.

Mum is generous, tenacious and very strong. We have a lot in common: we both like to get what we want. Once she'd made up her mind she wanted to have more children, nothing was going to stop her. Her weight fluctuated wildly and that whole period was very anxious, with a lot of sadness. She didn't discuss every miscarriage with me, but she certainly had some profoundly awful things happen to her. I think Mum got to the pointwhere she thought: "I just don't want to traumatise Kim any more." With each pregnancy that didn't make it, she probably felt even more galvanised to keep trying for the sake of those she'd lost. It never crossed my mind to say: "Stop:' I know Mum still has a real struggle coming to terrns with losing those babies, because she didn't feel supported by the doctors. It's only now that she's taken the time to talk it through. When Mum finally did have Roxanne and Marty she was in a much happier situation. She had a lovely home and she was really ready for it in a way that she hadn't been for Ricky and me. She seemed a lot less strict.

Mum's a real worrier, whereas I'm not. She likes to be in control, but she wouldn't have so much flak around her if she was willing to let go of the reins a bit. Instead of saying, "I want this like this and that's how it's going to be", she could say: "I'd like this, but what do you think?" She wanted a better pair of boobs, but they ended up too big for her body. I didn't say anything at the time because she was happy, but once she got into exercising they became too much to handle, even for Dad, so she had them reduced.
Mum's agreat businesslady and a tough negotiator, and she's set in place a whole host of situations that have made us financially sound. I was never interested in all that management stuff. I have much to be indebted to her for during those heady years when I was just basically landing at Heathrow and jetting off again. I did that for 15 years - thank God Mum, Nick Boyles, her business partner, and Rick were at home co-ordinating business deals and writing letters saying, "Sorry, she can't do this", and "Hey, you haven't paid us that". The whole Big M team was a very well-oiled machine. She didn't take any sh** from anybody.

Mum's always been my biggest fan and she always made me feel much greater than I thought I was. I only did The Big Breakfast after great encouragement from her. I couldn't do it right up until the camera went on. It was horrendous. I said to Mum: "I know you believe in me but you have to understand that everyone has their limitations, and this is mine".
There are areas where we're completely different. I love the arts and gardening, whereas Mum would be bored to tears walking around an art gallery. She says she loves gardening, but she doesn't seem to do an awful lot. Gardening was always my refuge from the madder moments of my career, which I knew I would want to end eventually. Being the glamorous pop star had crushed me a bit, because I started to feel my true value lay in a bottle of peroxide.

Mum and Dad have very traditional views on life, many of which I share - which is why I didn't get married until l was 36: I never found anyone good enough until I met Hal. There were times when I got terribly lonely and disillusioned, but Mum and Dad always reaffirmed to me that there was someone for everyone and that it was worth waiting for your soul mate." 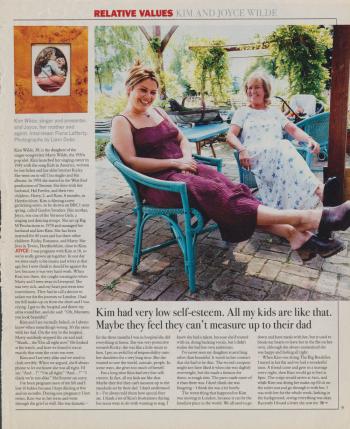 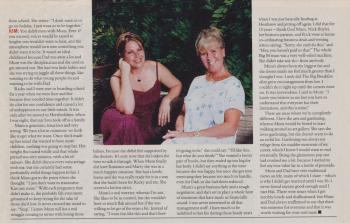