Simply Wilde about the barn

In the third week of our fascinating series on house history, pop star turned gardening expert KIM WILDE tells how converting a Hertfordshire barn into a family home prompted her to trace the place's romantic past, unearthing a tale of black knights and Thirties eccentrics.

1002 - The Saxon king, Aethelred the Unready, sells the manor to Aefelm, who in turn gives it to the Abbey of St. Albans. The abbots became lords of the manor until the dissolution of the monasteries.

1125 - The abbot's tenant of the land is the crusader knight William FitzAnketil. This is the first mention of a house called Sisservernes - Norman French for six alders.

1166 - William de Sisservernes owns the property. He may have been a descendant of FitzAnketil, and took his name from the house.

1303-1539 - Sisservernes is held by a family called Cheval until Henry VIII's Dissolution of the Monasteries.

1698 - Poyner's son sells the property to Thomas Kentish. It then stays in the Kentish family.

Late 19th Century - William Blake of Danesbury buys the property and makes it a tenant farm.

Early 20th Century - Sisservernes is bought by Harrison Bell, whose unmarried daughter sells some of the land and runs a poultry business

1990 - Kim Wilde buys The Great Barn from the Austins.

How we researched Kim's house

Local history societies can be an invaluable help in researching your home and you should always check whether there is one in your area. The Country Records Office will have details as will the Society of Genealogists.
Much of the research into Kim Wilde's property was carried out by the Local History Society, founded 20 years ago by Nicholas Maddes and a couple of friends. It now has between 50 and 60 local members and another 20 who live in other parts of the UK or overseas. Mr Maddex, a local government officer, says: 'Pulling all the details together from sources like parish and school records, census returns and old photos, can be as exciting as researching a novel, except that it's not fiction. Knowing its history can give a community a great sense of pride. It also pulls together those who've always lived there and those who are new to the place.'
He says maps prove very useful especially when used alongside a census. 'The map will show something like the pub or the church or the manor house, and the census will list the people living in a street. There were no street numbers before the 20th century, but if the census taker walked around in a logical progression you can work out who lived where. So, for instance, you can see there are four houses between the church and the pub and four family names. Sometimes, though, the census taker didn't progress logically and then you have to use other clues. 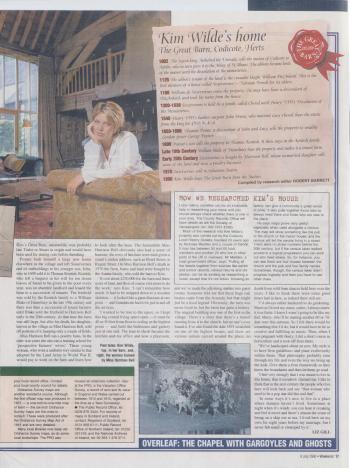