Kim Wilde shows how to create a winter garden bursting with colour.

After the fanfare of autumn leaves has gone, it's comforting to know you can still have colour in your garden this winter. Sterns, flowers and berries become exposed and many shrubs and flowers also release delicious scents. Late last year, I noticed a splash of fiery red brightening up a rather stark corner of the garden. It was Sorbus vilmorinii, which has beautiful berries that start out red, before tuming pink and then white.
Trees with omamental bark and twigs are especially prominent. The silver birch is now at its most stunning. Betula utilis var. jacquemontii is one of the best white-barked birches. Plant with the highly coloured stems of comus for an eye-catching contrast. Comus alba 'Sibirica' will give bright crimson-red sterns and Comus stolonifera 'F1aviramea' has vivid greenish-yellow shoots. They look better planted in groups and need to be pruned back hard in spring.
Some of the most wonderful bark displays can be found on maples. Acer pensylvanicum is one of my favourites, with beautiful snake-bark stripes of white and jade-green. Acer griseum (paper bark maple) looks good, with its mahogany-coloured strips of old bark peeling back to reveal cinnamon-coloured bark undemeath. Other maples with attractive bark include the coral-barked maple Acer palmatum 'Senkaki' and Acer capillipes. The many and varled fruits and berries around at this time of year are also very striking. The most seasonal bas to be our native holly. A good choice is nex aquifolium (silver milkmaid), which has plenty of berries and a beautiful creamy-white varlegated leaf. Holly plants are either male or female. Unless you go for a virtually self-fertile varlety, such as llex aquifolium 'Golden van Tol', you'll need a male close by to pollinate the female, and so produce berries. One of the berried shrubs that stands out the most, and a personal favourite, is Callicarpa bodinieri giraldii. It bas small clusters of vibrant purple berries. For a dran1atic display, plant several specimens together. For brightly coloured fruits that persist weil into the winter, plant Malus (flowering crab apple). Malus 'John Downie' produces bright orange-red fruits which have the best flavour for making crab-apple jeily. Malus 'Golden Hornet' bas eye-catching yellow fruits and Malus x robusta 'Red Siberian' bas scarlet fruit. Malus trees have slightly scented blossom in spring, making them a good choice for small gardens.
The winter chili doesn't give much incentive to go walkabout in the garden, but many winter-flowering plants are so sweetly scented that they might tempt you outside. Lonicera fragrantissin1a bas delicate creamy-white flowers with a penetrating scent - worth planting in a sheltered corner of the garden. Hamamelis (witch erflil bark displays bazel) is an outstanding winter-flowering plant with an exotic, spicy fragrance. The blossoms are also rain and cold tolerant. Plant in groups of three and choose red, orange and yeilow flowering varieties for a sizzling contrast. They do weil in moisture retentive and slightly acid soil.
Mahonia japonica has yeilow flower spikes with a rich fragrance - it's a tough plant suitable for most situations. Sarcococca humilis (sweet box), a slow spreading evergreen with dense glossy leaves and inconspicuous white flowers with a vanilla fragrance, is also quite tough. Grow Chimonanthus praecox (winter sweet) against a south- or west-facing wa11 near the house, so its fragrance can drift inside.

Garden of the month

Winter is a good time tor planting trees and shrubs. Buy bare-rooted specimens as a cheaper option to container-grown shrubs. This is especially relevant if you're thinking about planting a hedge. Prepare the ground in a 1 ft-wide strip, digging in lots of well-rotted compost, then plant shrubs in a staggered row. Prune shrubs back hard to encourage new sprouts trom the base. Good hedge shrubs include:
Fagus sylvatica (beech), which is deciduous, but keeps its leaves right through the winter
Buxus sempervirens (box), which is evergreen
Ilex aquifolium (holly), a great intruder-proof evergreen

Things to do in November

If you have a vegetable plot with heavy clay soil, dig the ground over roughly, allowlng frost to break down large clods. This will make it easier to rake level in the spring.
Order seeds for next year
Plant rhubarb in well-manured soil
Protect alpines from wet weather by placing a pane of glass supported by four short posts over them
Don't forget to keep an area of your pond free of ice to allow toxic gasses to escape.

Q: A green shoot has appeared on my variegated weigela. Why has this happened?
A: This is called reversion and can be caused by drought or a lack of nutrients. If left unchecked it can ruin the shrub, as the green shoots are stronger and will outgrow the variegated foliage. Cut out any normal green shoots as soon as they appear. 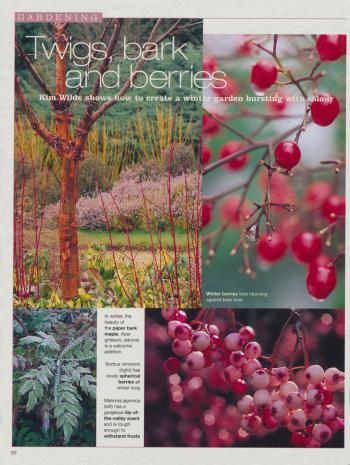 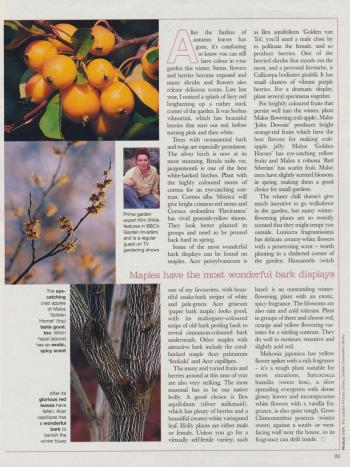 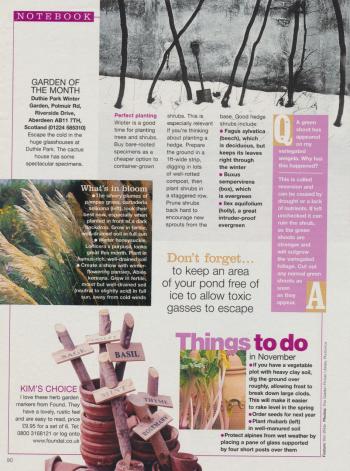