It's a new Millennium - and a new baby - for singer turned TV gardener Kim Wilde.

Kim Wilde is lying in bed at her Hertfordshire home, barely able to keep her eyes open. She's got a cough, her body aches and at nearly nine months pregnant with her second child, she's exhausted. Is she complaining? No chance. Even when the going gets tough, Kim marvels at the miracle of her growing baby.

"It's so lovely being pregnant", she beams. "And second time around, I feel so much more relaxed. When you have your first baby, the body doesn't know what to do and goes ballistic. This time around, it's been plain sailing and I can't wait for the birth." Ask if she's anxious about the birth and 39-year-old Kim, who already has a two-year-old son Harry, laughs. "There is such a thing as an epidural, you know", she says. "To me the birth is so exciting. You lie there on the tale and whatever happens, you know you're going to get this wonderful girft at the end of it. Nothing prepares you for the emotions you feel when you first look down at this perfect little baby. The love is overwhelming. I felt maternal before I had Harry, but I didn't realise how strong it would be. I know I'm going to feel just the same about his little brother or sister. It's just going to be the most perfect gift that I can give to Harry. I grew up with a little brother and I think it's so important to have siblings."

Motherhood is everything Kim dreamed of and more - and what makes it so special is that at one stage in her life, she woried that it might never happen. For years, her love life was a disaster. She'd been let down by a string of men and hadn't even lived with anybody until she married actor Hal Fowler, now 32, in 1996 when she was 35. "I spent a long time worrying about whther or not I'd meet the right man and have kids. It was something I'd always wanted and it just wasn't happening", says Kim. "Then I thought to myself, 'What's the point of worrying like this, I'm only causing myself grief.' I realised that was perventing me from meeting my soul mate. So I developed a new perspective on life. I started to feel really good about myself and what I was doing. I felt stronger than I ever had before. Then I met Hal - when I was really ready for meeting him. I was over the moon - it's the most romantic thing that's ever happened to me."

The couple met when Kim starred in the stage musical Tommy, and they married just seven months after meeting. He proposed after flying her to France for a romantic lunch and presenting her with an engagement ring. "We both wanted the same things, at the same time, in the same way, which is why, I think, we got married", she says. "I knew really early on that he was the right man or me - he's my soul mate and I was so thrilled that I managed to find him. He's a wonderful husband and father, and, like me, he's really looking forward to the arrival of our second baby. He's as family-orientated as I am."

As pop stardom and toddlers don't really mix, Kim's put her singing career on hold and is now looking forward to working in an exciting new field that's as far removed from hit singles and promotional tours as you can get. She's just spent five months working as a garden designer on the new ITV series Better Gardens, which is a spin-off from Better Homes. Presented by Carol Vorderman, the show features the transformation of two neighbouring gardens.

It all began when Kim went to the local horticultural college when she was pregnant with Harry. She explains: "When I moved into my house, there was no garden, just a farmyard and a meadow. I wanted to design a garden myself, so I went to college for seven months to get a grasp of what's going on in the green world." When programme makers went to the college looking for a talented young designer for the show, they were told Kim was the best in the class! "I was thrilled. Gardening's my passion and I have bundles of enthusiasm for my new job", she says. Kim hopes to set up her own garden design business in the future - but not until the kids are at school.

"It's something I'd really love to do and I hope that there'll be a few phone calls after Better Gardens", she says. "I won't be doing it for a while though - I'm really setting up a career which I can slip into in my 40s and 50s. I want to be at home as much as I can while the kids are young. I think it's important, as those first years are so precious and so fleeting. I'd hate to be away from home and possibly miss those milestone moments, like the first words or steps. My priorities changed when I had Harry and where my career once cae first, it's my family that I'm devoted to now. I'm really looking forward to taking time off when the baby's born, as there's nothing like being at home with a newborn. When I brought Harry home, I couldn't stop staring at him. I recorded my 11th album shortly after he was born and I took him to the studios. You could hear this sweet snuffling, sucking noise over the vocals. I'm amazed at how quickly he's grown up. He's a lovely little boy and there's nothing nicer than having him clamber into my bed in the mornings for a cuddle. With another one on the way, we might have to get a bigger bed!" 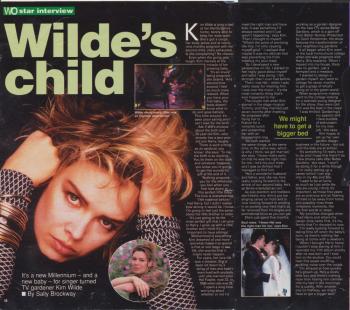