A minute with... Kim Wilde

Today the 80s pop icon is more at home pruning roses than strutting her stuff on Top of the Pops. Now 38, she co-presents the BBC's Garden Invaders and lives with husband Hal and children Harry, three, and Rose, one, in Herts.

Do you think you'll ever be known as Kim Wilde the gardener, rather than Kim Wilde the former pop star?
People still know me as the Kids in America girl and I don't think that'll ever change. I wouldn't want it to really because it was a great time.

How crazy was the lifestyle?
Going on tour with Michael Jackson was wild. It was an amazing opportunity and it made a true performer out of me. I never got to hang out with Michael though because he's more comfortable in the company of children than adults. My younger brother and sister came backstage and met him before I did, even though I was the supporting act!

Do you miss the glamour of being a pop star?
If I want to look foxy and tasty now I can, but I know if I don't feel like that it won't have any impact on my career. Now when I go to the gym or resist that second slice of toast I'm doing it for me.

What mementoes have you kept from your pop star days?
I've kept the boots I wore in the Kids in America video and I've got a room full of records and paraphernalia. There's a Lycra catsuit affair, which even by the low standards of the 80s plumbed wole new depths of bad taste!

You were a pin-up for a whole generation. Did your husband Hal have your picture on his bedroom wall?
He's one of the few people I've met who has no awareness of pop music at all. He trained as a choir boy and toured with the national youth choir when I was having hits, so he wasn't really interested in my sort of music.

What's the most romantic thing you've done for Hal?
He's a Hobbit fan and I bought this fantastic wizard carved in oak that was about 5ft tall. I put it in the field behind the house and at dawn on the morning of our wedding anniversary I told Hal I thought someone was coming up the field. He ran outside in his underpants! When he saw it he loved it so much that he ran right up and hugged it.

Do you have any major regrets?
I have done things wrong but at least I never married the wrong person. I think you can get over most things in life but I don't know how you recover from that. I'd never come close to feeling like I wanted to marry anyone until I met Hal when we appeared together in the musical Tommy. By that stage I was reaching the conclusion I'd never find the right man. But my feelings for Hal overwhelmed me.

With the 80s becoming trendy again, are you tempted to sing?
Although I'd been approached a few times for various 80s line-ups, the last few years have been taken up with having babies and being pregnant. Luckily they kept on asking and this autumn there's a gang of us going on tour together. (For details, see below.) I know Paul (Young) fairly well because we've kept bumping into each other over the years. And I used to meet the others at TV stations all over Europe. I can see we're going to have a right old knees-up during and after the shows. I still haven't decided what songs I'm going to sing. And I haven't thought about what I'm going to wear but as long as it hides my bum I'll be happy.

Free tickets to give away

We have a pair of tickets for each venue worth £25 each to give away.Just send a postcard with your name, address & daytime telephone number and your preferred venue to: Here & Now Tour Competition, Woman's own [address]. 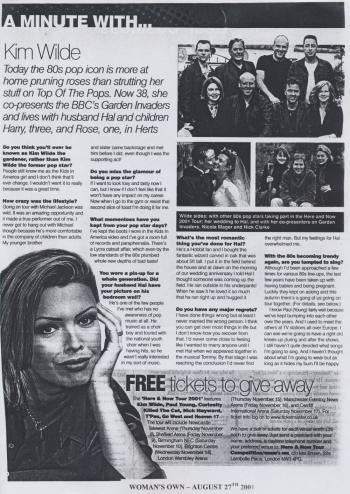