For someone who clearly prefers plant life to pop life, all things green are taking a back seat when Kim Wilde returns to Wembley to join the likes of Go West, Paul Young and Heaven 17 for an '80s revival concert. And lest we have forgotten the dulcet tones of Miss Wilde, The Very Best Of Kim Wilde is released this month too. Is it perhaps time to get those ra-ra skirts and leg warmers on again to fully celebrate this ongoing renaissance?
So with the 80's very much in vogue for some time now, Kim Wilde is only just ready for a revival. "I wasn't ready for it to happen before because it just seemed a bit premature. I can remember certain outfits vividly, but I think I managed to transcend the worst aspects of it. And it still bemuses me as to how people might dance to that kind of music." Needless to say she still has fond memories of the era, not least because it was the decade that 'found' her. In 1981, at the tender age of 19, Kim burst into the pop world. Her first single release, 'Kids in America' went straight to number one and in 1983 she won an award for Best British Female singer. Despite instant fame, Kim chose to spend the first three years of her pop star career living at home with her parents. "I just wasn't interested in the rock 'n' roll lifestyle," she reflects. "I knew how to have a good time - go to clubs, date boys and have a few beers, but I was intent on keeping my life as normal as possible."
Following stints at television presenting (The Big Breakfast) and the female lead in the West End theatre production of Tommy - it seems that Kim Wilde has truly found her niche in the world of horticulture - a transition which was totally unpremeditated. "I made a decision in my head to walk away from a career which wasn't exactly going brilliantly anyway", she says. "I'd met the man I wanted to spend the rest of my life with and we wanted to start a family. And I realised I just didn't want to make records anymore." So creative energies were channelled into designing a garden for her children, which came to fruition after she completed a horticultural course whilst pregnant with her son.
In fact, the decision to put music aside has seen Kim busier than ever. Juggling motherhood, college, a monthly gardening feature with Prima magazine in addition to recording a new series for the BBC - Garden invaders - Kim does still find the time to watch Top of the pops now and again.
"I would worry about myself if I didn't!" And with the likes of Travis, Coldplay and Kylie featuring in her current collection, today's pop offerings are still very much to Kim's taste.
So for one night only, when the world of nappies and pots and plants are superseded by pure, decadent '80s tunes, Kim reveals that her biggest worry is carrying off her '80s outfit. "I just hope I am going to be able to walk in my five inch heels," she confesses. 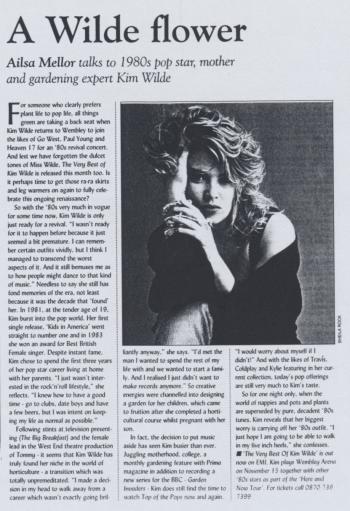