All back to my place

In which the stars divulge what sonic delights are guaranteed to get them going...

What music are you currently grooving to?
I had to listen to a remix of Kids in America recently, and unfortunately I did it in the house. My two young children have rather latched onto it and demand to hear it two times a day. I feel like writing to the neighbours to apologise. I listen to stuff in the car. I have a Steely Dan tape I made years ago, which I listen to constantly. I love the harmonies, the sophistication and the songs. I hear Travis and Coldplay a lot, but think Travis have better songs.

What, if push comes to shove, is your all-time favourite album?
One from the heart, the soundtrack to the Francis Ford Coppola film by Tom Waits and Crystal Gayle. I love Tom Waits and I love the way his gravelly growl combines with her really sweet, pure voice. The first night I invited my now husband back to my place, he came in and sat at my piano and played Take Me Home. I started singing it and he was shocked I knew it. Serious eye contact commenced!

What was the first record you ever bought? And where did you buy it?
Big Seven by Judge Dread when I was 12, at the record shop in Welwyn Garden City. It's really rude, I'm not sure I knew it at the time. he was bad, mad and dangerous to know but I've always had a thing for men that are naughty.

Which musician, other than yourself, have you ever wanted to be?
Todd Rundgren. He's a brilliant songwriter. He really unfluenced me. I covered one of his songs once, which was my homage, but it ended up more fromage really. It was called Lucky Guy. Lucky Guy, unlucky song. At least I had a go.

What do you sing in the shower?
I'm an ín, water on, out, stop-kids-trying-to-kill-each-ther' kind of girl.

What is your favourite Saturday night record?
I like a bit of soul music on a Saturday, so it would probably be something by Stevie Wonder or Mary J. Blige.

And your Sunday morning record?
'Hats' by The Blue Nile. It's up there in the Top 10 albums of all time. It's deeply moving . 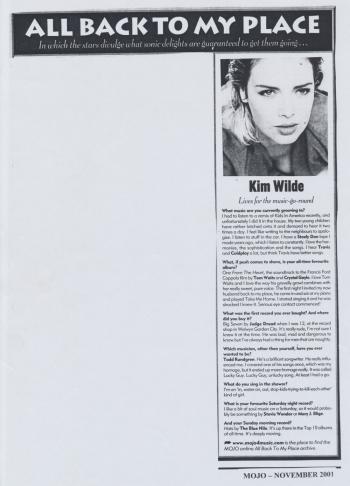