She was the Kylie of her day - the pop princess who started off sweetly wholesome, became a raunchy rock chick, and dated and dated and dated without any luck, singing her heart out by day and crying herself to sleep at night. Now, 21 years af ter she first climbed up the charts as the blue-eyed girl of British pop, Kim Wilde is climbing back into her leathers, strutting back on stage and bellowing out Kids In America all over again in a series of nationwide concerts.

But what a difference when you meet her at home. The vertically sprayed bleach-blonde hair and heavy black eyeliner has gone. The woman who had ten hit albums, more than 30 hit singles, performed to two million people live on the Bad tour with Michael Jackson, and even got to No 1 in America (with You Keep Me Bangin' On) is more Forces sweetheart than sexpot, with her Forties-style floaty dress and soft blonde hair swept back in a huge purple flower clip.
She's Mrs Fowler now, mother of Harry, four, and Rose, nearly two, and a landscape gardener living in a converted barn in Hertfordshire. But she still has a glint in her eye and promises she's going tor the 'raunchy' look on tour - and I'm sure she can still pull off the transformation.
For, as Kim freely admits, the road from 20-year-old earthy star to 40-year-old earth mother hasn't been easy. A happy marriage and a second career in gardening - she presents Garden Invaders on BBC1 - were the unexpected bonuses after a troubled personal life which left her in despair.

In fact, what is now a much loved family home at one point was the symbol of her broken dreams. It was moving into the 400-year-old converted barn in 1990 that triggered the depression which seems to have changed her for ever. She is shy, quietly spoken and slightly nervous, in marked contrast to the fearless, brassy pop star persona ofher 20s.
'I think it was the fact that I was moving into this lovely home on my own,' she says. 'I was really disillusioned. I'd always prayed that, if I left my bachelor lifestyle in London, it would be with someone else, to start a new chapter, and that wasn't happening. I was very upset about that and frustrated.

Looking back, I think the disappointment of it all was quite profound. What with my rollercoaster career on a descent and also tuming 30, there was space for me to plummet emotionally, which I did for a while.'
She felt 'totally unmotivated' and gained two stone on her 5ft 6in frame, which prompted her family to tell her she was overweight.
'Looking good is part of the territory of being a pop star, so I wasn't angry with them - I was grateful,' she explains. 'I was up set that it had got to that point, but it was the kick that I needed.'
Kim climbed out of depression and lost weight through exercise ('I ran off my anxiety') and taking a holiday. She says: 'It was probably the first time in ten years I'd been on holiday properly. I went on a fantastic trip with a girlfriend to Thailand. We took rucksacks, we didn't know where we were going, and no-one knew who I was. It was then that I realised I had to spend more time looking after myseIf and that was when I started gardening.'
Her love-Iife had never provided her with the stability she craved. Kim had been publicly linked and unlinked to a seemingly endless stream of men with varying amounts of promise.
They included Chris Evans (they briefly co-presented The Big Breakfast), Simply Red star Mick Hucknall, Julian Lennon, a car dealer, a saxophonist and a student ten years younger than her. Then, at the age of 35 when she'd all but given up hope, she ran into Hal Fowler, the actor and producer who became her husband.
Although Kim is seven years older than Hal, she says the age gap has never been an issue between them 'because he had an old head on young shoulders'.
They met in rehearsals for the musical Tommy in January 1996, went out to dinner in March and were married in September. She says she knew he was the one, 'but it was gradual. I was drawn to him immediately because he was such a strong, tunny and charismatic individual. I never thought I would meet someone who I wanted to spend the rest of my life with. I've had such a fantastic life and a career that I dreamed of as a child, and I thought "I can't expect to have more". But I was hoping with all my heart that I'd find someone to share my life with. I was relieved when I found him. And I knew what I feIt for him was something I'd never feIt for anyone before.'
Kim was born into the fame game. Her father is Marty Wilde, the Fitties rocker, and her mother Joyce was a singer (in The Vernons Girls) and her career was very much a family business. Kim was the eldest of their four children, and her brother Ricky wrote her songs for her with Marty.
'Hal and I both come from very strong, close families and I think that's what ultimately united us. We wanted to bring up a family and run the course,' says Kim. Close-knit though it undoubtedly is, the Wilde family hasn't been without its troubles, either. The only time Kim clams up is when I mention her father's drinking.
In the early Eighties she publicly called him an alcoholic and in the late Nineties he was arrested for drink-driving more than once. When I bring this up, she bangs down her coffee cup in her saucer and says: 'Dad doesn't drink at all now.'

Kim still drinks, but not as much as she used to when 'I thought it was just liquid and didn't realise it could have calories in it'.
She says: 'I respect the difference between loving alcohol and needing it, and the quickest way for me to lose weight is not to drink for a while.
'I'm not drinking at the moment, but good food and wine are part of our lifestyle, and Hal and I will be the most drunk people at any wedding if the children aren't there.'
Kim's mother Joyce had her problems too - most specifically, a condition which, before diagnosis, meant she had several miscarriages. This didn't put Kim off motherhood,though.
'There were very specific reasons why that was happening to her. I was profoundly happy and healthy when I was pregnant, although, shortly after having my children, I got very panicky and kept thinking awful things.
'Anything on the news to do with children would send me into a deep despair, and I'm still a total wimp who has to turn off anything mildly aggressive on television. I feel that it's hard enough keeping strong tor yourself and the kids without being battered by the world every day.'
The garden is her refuge, and had been part of Kim's tberapy long before marriage and motherbood. She says: 'I'd get off the plane in my pop-star clothes and make-up, and come back here and run straight into the garden and start potting and pruning. It was a passionate hobby but I never thought it would become a second career.'
It wasn't long before a television production company discovered Kim's secret passion and convinced the pop star-cum-novice gardener to turn TV presenter. The viewers loved her. As her participation in the Eighties revival tour demonstrates, though, rock 'n' roll is still in Kim's blood. 'I think that maybe I'll do one more record, but if it happens it happens. I won't force it,' she says. Somewhere inside this happy,wide-eyed blonde, who looks all soft and floral and talks rapturously about her orchard and herb garden and wild flower meadow, there still beats the heart of a rock chick. 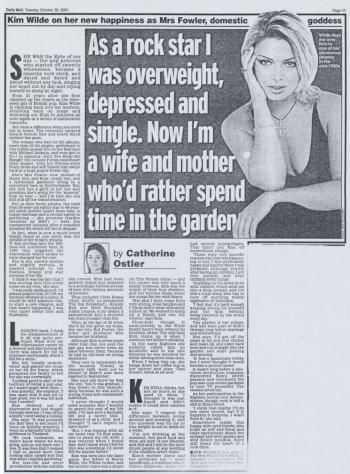 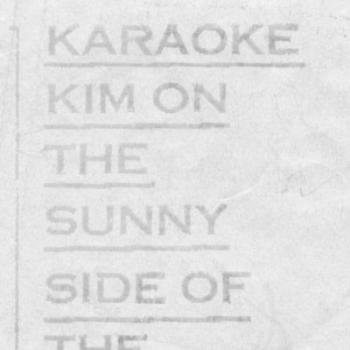 Karaoke Kim on the sunny side of the slopes