Back to the Wilde

Despite people's insistence they loathe the era, thousands will risk their street cred to revive their tainted youth. On Wednesday night, hoards of Thatcher-era children will unite at the Brighton Centre to celebrate the worst cultural decade since the Ice Age.

The reason for this nostalgic indulgence is Here And Now 2001: The Greatest Eighties Tour Ever, starring Kim Wilde, Curiosity Killed The Cat, Heaven 17, Go West, T'Pau, Paul Young and Nick Heyward. During the Eighties, these acts scored more Top Ten hits than you could shake a Filofax at.

There was Wilde's Kids in America, Young's Wherever I Lay My Hat, Curiosity Killed The Cat's Misfit and T'Pau's China In Your Hand. But their flash-in-the-pan popularity faded as the Nineties dawned. As public interest waned, Ben and his curious cqats took the hint and scampered off with their tails between their legs. But others, like T'Pau, Go West and Paul Young, hung around like a nasty whiff, polluting the air waves with foul-sounding tunes.

But one Eighties icon refused to milk her career to a cheesy death - Kim Wilde. Inspired by her father, Fifties idol Marty Wilde, Kim mastered a hugely successful pop career. At the age of 20, she topped the charts with her first single Kids in America and went on to have UK hits with Chequered Love and Water On Glass. She even cracked the US market in 1987 and swung to number one with her remake of the Supremes' You Keep Me Hanging On.

But after countless singles, ten albums and a tour with Michael Jackson, even Kim found her career in decline. Rather than flogging her talent to a pitiful pulp she chose to explore new opportunities. During the Nineties, Kim had her own radio show and spent a few months presenting Channel 4's The Big Breakfast with Chris Evans. They had a mysterious whirlwind romance which ended suddenly after six weeks.

Kim explains: "It was an intense relationship. Sometimes two people meet and have a profound effect on each other and it can be years before they understand why. The world works in very mysterious, very wonderful ways. Through meeting him, lots of things changed for me - a lot of attitudes about myself and my work."

While Kim's career was both fun and fulfilling, her love life was less than satisfactory. A love affair with Johnny Hates Jazz singer Calvin Hay ended disastrously, leaving her depressed and alone. In an attempt to boost her spirits, she sold her London flat and moved closer to her family in Hertfordshire. She continued to write music and then, unexpectedly, in February 1996, landed a starring role in the West End musical Tommy. Cupid got to work backstage and, within weeks, Kim had fallen in love with co-star Hal Fowler.

They married and Kim gave birth to her first child Tristan in January 1998. A little girl, Rose, followed two years later. Although blissfully happy with family life, Kim still craved more. She wanted something to replace her passion for music and found it in gardening.

She enrolled at Capel Manor College of Horticulture and Countryside Studies and began digging a career for herself as a gardener. "I love the anonymity in gardening", says Kim. "The other students on the course weren't interested in Kim Wilde the singer. I was accepted as just one of them, which is great. It's a world where I don't have to play the music star."

Kim's golden voice won her music awards but it was her green fingers which won her a Royal Horticultural Society medal for her All About Alice garden which she designed at Tatton Park in Cheshire.

When ITV heard about Kim's secateur skills they plucked her from the garden and planted her in front of the viewing nation. For a year, she presented Better Gardens and her new series Garden Invaders will be on our screens in January.

So what's a happily married mother-of-two, with a flourishing career as a TV gardener, doing on stage with a load of Eighties bands?
"I'm 40 this year and I can't think of a nicer way to celebrate the big four-zero than on tour performing for thousands of people. It was totally unexpected."

Since agreeing to take part in the tour, Kim has been following a strict health and fitness regime.
"I've needed to get fit since the babies so the tour is a good reason to focus on losing weight. I've been doing a lot of running and yoga. I'm still trying to squeeze into my leather trousers - the zip won't do up!"

Some feel the past is best left alone and there has been much media criticism of the Eighties revival. But Kim is an eternal optimist and, like any girl, just wants to have fun.
"I'm doing this tour with my tongue firmly in my cheek. I hope people come to the concert with the same attitude. It's not to be taken too seriously - just a bit of fun." 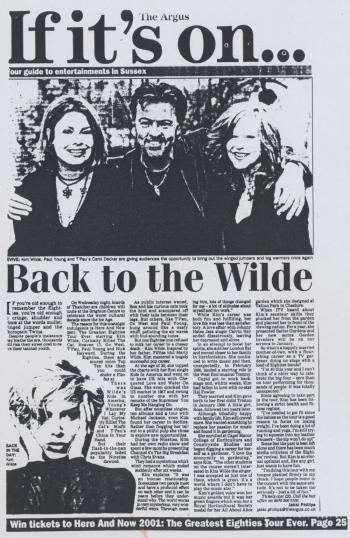