She was the Britney Spears of the eighties, but now Kim Wilde has traded in the jet-set lifestyle for something more down to earth - gardening. Jane Dudley met her near her Hertfordshire home to talk about her new career.

It's not the most natural of career paths, but Kim Wilde, daughter of Fifties' rocker Marty, has found the perfect job. She's as happy in her wellies, planting vegetables and shrubs, as she was pouting and performing on Top of the Pops. This week, viewers will be able to see the transformation as a new series of 'House and Garden invaders' begins, in which Kim designs 20 small gardens against the clock. In the series, filmed last summer, Kim has to finish designing each garden in a day.

"It's mainly families who have moved into a new home and don't have a clue what to do with the garden", says Kim, who was joined by a team of horticulturalists to help carry out the task. "If they wanted gravel, or pebbles or particular plants, they had to win them, otherwise they couldn't have them in their garden." She laughs at the idea that she might become the Laurence Llewelyn-Bowen of the gardening world.

While it may seem a drastic move from being a pop performer, with hits including 'Kids in America', 'Chequered love' and 'You keep me hangin' on', to becoming a garden designer, it's something that has always been at the back of Kim's mind. "I've been interested in gardens for as long as I can remember. I moved to Hertfordshire when I was eight, and started to notice gardens and parks and things more and more, and it just grew from there."

The catalyst for the change in lifestyle is Kim's husband, actor Hal Fowler, whom she met when they were both performing in 'Tommy', Kim's stage debut, in the West End. "I'd always been a fan of 'Tommy', so when the opportunity came up, I jumped at it. I'd spent years going all over the place on promotional tours, and I was just desperate to sleep in my own bed for a while, that it seemed the perfect job", she remembers. "Nothing prepared me for how exhausting it was to perform night after night - it was relentless, but I really enjoyed it". Following a whirlwind romance, Kim and Hal married in September 1996, and Kim began to put her plan into action.

"It was always my fantasy to get married, have children, and grow my own vegetables, flowers and plants. That was just always how it was going to be, so when I married Hal, I knew my life would change." She was becoming disillusioned with the music scene, having released an album she was particularly proud of, 'Now And Forever', only to see it become a commercial disappointment.

Within 18 months of marriage, baby Harry, now three, was born, followed two years later by sister Rose. Kim took time out while she was pregnant and decided to go to college to learn more about her favourite pastime, and enrolled at the Capel Manor Horticultural School in Hertfordshire. It must have been a surprise to her fellow students to see a former Eighties pop icon in the classroom, but Kim says: "I'm just plain Kim Smith to them. I think they find it rather amusing, as does my teacher!" Four years and a role in ITV's Better Gardens later, Kim's still at the college, studying for a City and Guilds qualification in Planting and Planting Design. At 40, she still retains her pop star looks, but the image of her home life is a far cry from the tousled blonde image she is best remembered for.

She burst on to the music scene in 1981, with her first single, 'Kids in America', getting to number two in the charts when she was 21. It was a real family affair: brother Ricki and father Marty wrote and produced for her, and her mother Joyce, former vocalist and dancer with the Vernons Girls, was also involved in looking after Kim's best interests. Kim's younger sister Roxanne, whom Kim was allowed to name after the Police hit, has just started out in the music business, with a band called Dimestars, who recently supported Kylie Minogue on tour. While the family ties remain strong, they are all currently working on their own careers - Marty still performs regularly - and he says that although he is supportive of Kim's new career, he has his doubts as to whether she will stay away from the music business for long.

"He says, 'Once a performer, always a performer', and couldn't quite believe that I actually meant to leave the business. But I think it's probably easier for men to carry on performing. When you've got babies of your own it's a lot harder", says Kim. While she has no immediate plans to resume her pop career, she doesn't regret a single moment, and has some unforgettable memories. "I had a whale of a time in my twenties, just riding along with it, but I was really naive when I started." She's had her fair share of column inches, mainly concerning her love life before meeting Hal, but remains philosophical: "I was fair game for the Press; you put yourself in that position, so you have to put up with it really."

Her most treasured memory was of supporting Michael Jackson on his Bad tour. In contrast was the time when she thought she was finished with the pop world, when she was appearing on a TV show in Newcastle. "I saw a bunch of journalists heading towards me, and in my vain way I thought, 'Here I go again'. But then I realised they weren't going to stop; they started talking to Jennifer Rush instead. I was heartbroken and mortified and cried all the way to the airport.  I can laugh about it now, but  I'm sure the feelings would come flooding back if I saw Jennifer Rush again!" 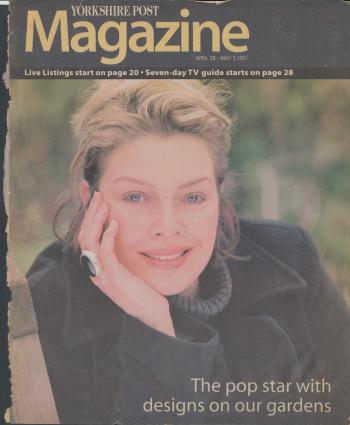 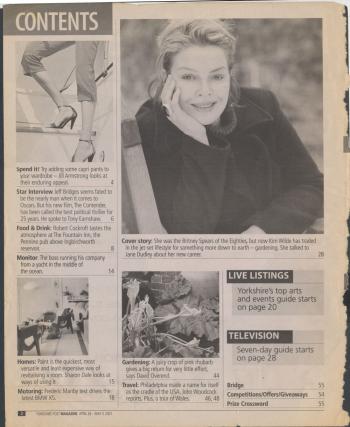 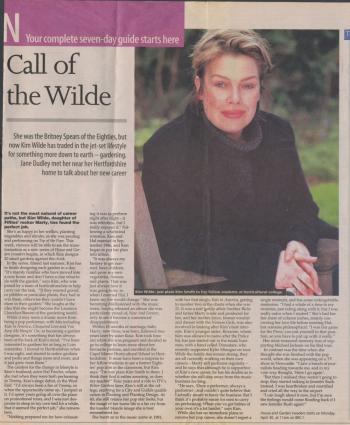